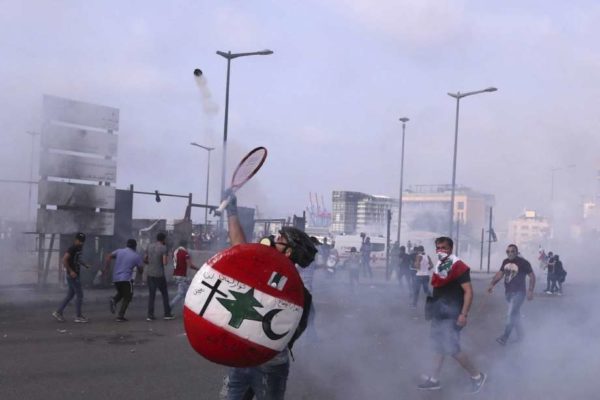 BEIRUT: Following a night of violence, calm was restored in Beirut and other parts of Lebanon on Sunday, with the army warning against dragging the country into chaos that could endanger “national unity.”
Riots broke out in central Beirut and other areas after videos circulated on social media showing some supporters of the Amal Movement, and the Iranian-backed Hezbollah, chanting sectarian insults targeting revered religious figures.

The overnight violence left 25 soldiers injured. The Lebanese Army issued a statement vowing action against those who jeopardize the “state’s security.”
Riot police fired tear gas at protesters, after Saturday’s attempt to reboot anti-government demonstrations quickly degenerated into rioting and stone-throwing confrontations between opposing camps. Lebanese troops deployed to separate the rival groups, and the tensions eventually subsided before dawn on Sunday.
Protesters also called for Hezbollah’s disarmament. According to the army’s statement, seven people — four Syrians, one Palestinian and two Sudanese nationals — were arrested for rioting.
All political and religious parties unanimously condemned the sectarian incident and sought to contain the strife.

President Michel Aoun called on all political and religious leaders and citizens, who lived through the events of 1975-1976, to take all possible measures against such elements to ensure national cohesion.
Aoun warned: “Any security setback — if it occurs — will not be in anyone’s interest.”
The head of the Bar Association, Melhem Khalaf, said: “Were the 17 years of senseless fighting, 200,000 deaths and displacement of 1 million people was not enough?”
As people in the street and on social media expressed their anger and disgust at what happened during the civil protest, it was announced that a protest scheduled to take place on Sunday outside the US Embassy in Beirut had been canceled.
The protest, which was going to be organized by Hezbollah supporters, was to denounce US interference in Lebanon’s internal affairs.
Dr. Ziad Abdel Samad, researcher in development and public affairs, told Arab News: “Indeed, people are repulsed by what happened, but it will not prevent them from taking to the streets again to demand their rights.”
He said: “The movement that resumed on Saturday is a continuation of the Oct. 17 revolution. People are free to voice their demands. The majority raised economic slogans, and if some called for disarming Hezbollah, that does not mean they should be accused of treachery. Saturday’s demonstrations surprised the authorities, so they decided to respond with violence in which they reminded us that they can repeat what they did on May 7, 2008, when Hezbollah militarily seized control of Beirut after clashing with the Future Movement as well as the Progressive Socialist Party in Mount Lebanon. About 100 people were killed then.”
Abdel Samad added: “What happened on Saturday will not eliminate the civil movement, which is committed to its demands and to pressuring for the reestablishment of the authority by forming a government with powers that allow it to draft a new electoral law, as happened in Tunisia.”
He said: “The current government is unable to accomplish anything. Even the negotiation between the government and the International Monetary Fund were not serious. It seems as if the government, and especially Hezbollah, do not want to resort to this option to save the country’s economy. They want to resort to their choice: Iran. In this sense, Hezbollah does not care about Lebanon — either it takes control or the country gets burned down.”
Public affairs expert and activist Dr. Walid Fakhreddin told Arab News: “Hezbollah previously caused such tensions four or five times since the protests started on Oct. 17. However, this is the first time this happened under the government of Hassan Diab. This means that Diab’s government is in crisis, and this is Hezbollah’s way (of operating) when it does not want a government to continue.”
Fakhreddin added: “On the other hand, no one is ready to stand up to Hezbollah. I believe Diab’s government is unable to continue and will not manage to obtain funds to prevent economic collapse.”
He said whatever happened on Saturday was a response to the protesters’ demand to disarm Hezbollah “because another protest with this demand took place a few days ago outside the Palace of Justice in Beirut, and Hezbollah did not respond that time.”
He added: “I think Hezbollah was surprised that people took to the streets despite being intimidated and amid a pandemic.”
Political analyst Ghassan Hajjar, though, told Arab News: “What happened is new. It is not an extension of Oct. 17, but rather it will mark the start of a new stage.
“Hezbollah is in crisis more than ever before because it believes the threat against it is increasing and has become direct. The civil movement is targeting Hezbollah by raising the demand for its disarmament. Hezbollah is afraid of what is introduced regionally by federations that are tearing apart the Iranian axis.
“No one won on Saturday — not the government, the Hezbollah nor the protesters. Everyone lost,” he added. “I do not think that toppling the Diab’s government needs these clashes. Bringing it down requires a political decision by Hezbollah. It is true that there is talk about a government change, but it will only happen if Hezbollah is convinced that Saad Hariri will return to head the government and control the Sunnis.
“Hariri’s return to the government is in the interest of the Free Patriotic Movement (FPM) after the losses it suffered as it does not have a Sunni cover, and the Shiite cover is not enough if the FPM considered the republic’s presidency. However, no agreement with Hariri has been reached.”