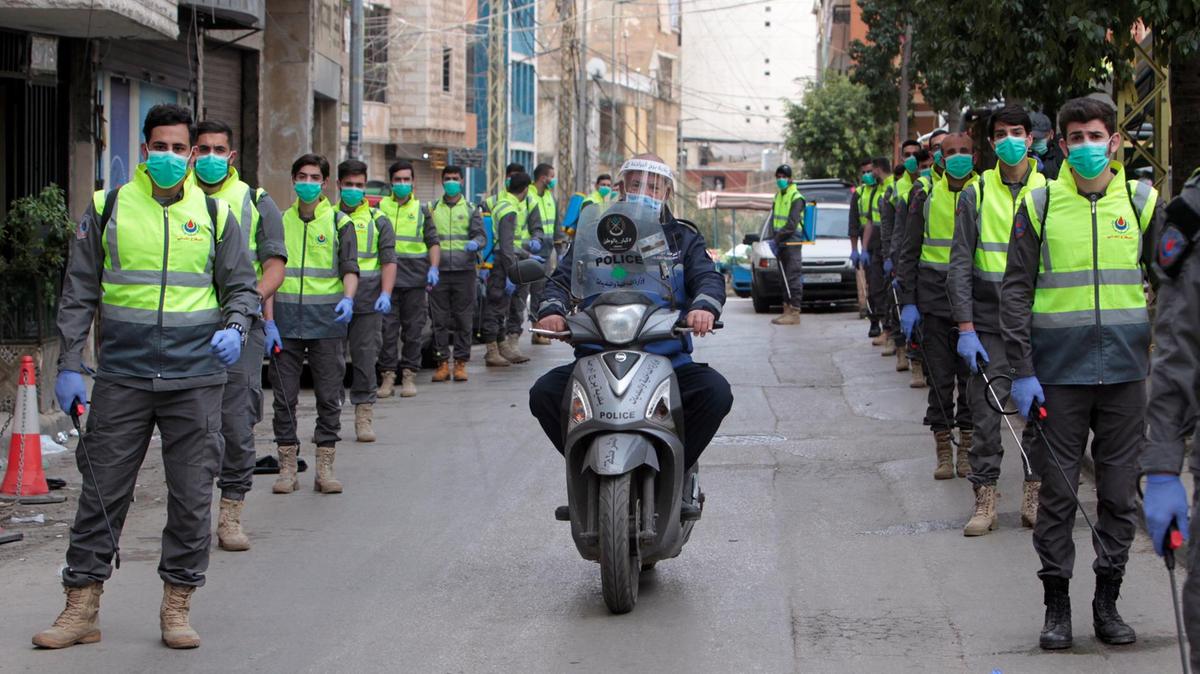 More than 100 ambulances, several of them equipped with respirators, lined up in neat rows in Lebanon’s southern city of Tyre on Tuesday. In front of each one, Hezbollah volunteers wearing hazmat suits, gloves and masks stood silently in the spring sunshine, hands clasped before them. In the background, the vestiges of a crumbling Roman arena and a giant portrait of Ali Khamenei, Iran’s supreme leader and Hezbollah’s patron.

This was the third time that the Lebanese party-cum-militia invited the media to witness its response to the novel coronavirus pandemic, each time in a different stronghold. When the ambulances all turned on their emergency sirens at once while driving through Tyre, the noise was deafening.

Hezbollah has ostentatiously directed its powerful logistical and organisational capabilities developed over the past decades, first as a guerrilla force fighting Israel and then as a regional militia in Syria’s civil war, towards limiting the spread of Covid-19 in its home country.

The pandemic has provided a welcome opportunity for Lebanon’s political parties to make a comeback at little cost several months after their grip on the country was shaken by nationwide anti-government protests, analysts say. In early April, pictures circulated on social media showing locally produced face masks stamped with their logos. But as Hezbollah is the only party with a paramilitary force, its resources are by far superior and more noticeable than others’.

On March 26, the group announced it was mobilising 25,000 people across the country for the coronavirus effort. It has 295 doctors, 505 nurses, 14 health centres and 55 ambulances at the ready in southern Lebanon alone, the party head for the region, Abdallah Nasser, told reporters at a Hezbollah building outside Tyre that houses its “corona crisis management committee”.

Youssef Jaber, director of a Hezbollah-run psychiatric hospital in the village of Jwaya that has been emptied to receive Covid 19 patients, said similar preparations had been made in four other hospitals in south Lebanon. They have a total of 150 beds, although more may be made available if needed, he said. The five government hospitals in the region have a of total 345 beds, according to Mr Nasser’s power point presentation.

War terminology has been widely used by world leaders to describe the fight against the virus, but it resonates vividly with Hezbollah, which remains on high alert at all times. “The logic is war preparedness. We are putting all our capabilities towards the coronavirus. Civil defence works in war. Field hospitals are also used in war. But other military capabilities are not needed,” said Mr Nasser.

He said Hezbollah’s Covid-19 response was rooted in several pillars. The first was the protection of God and the second was “Hezbollah’s central plan which was originally present … in case of emergency and in case of war with Israel.”

Despite the global focus on the pandemic, tension has been brewing between Hezbollah and its archenemy Israel, which recently intensified the deployment of surveillance drones and war planes above the group’s stronghold in south Beirut and southern Lebanon. On Tuesday, the Israeli army entered disputed territory along the demarcation line between the two countries, causing a tense stand-off with Lebanese army. The next day, an Israeli drone hit a Hezbollah car in Syria near the Lebanese border. No casualties were reported.

The Lebanese government welcomes any help it can get against the coronavirus threat as it struggles with a severe economic and social crisis that hit months before the pandemic. So far, the toll from Covid-19 has been comparatively low, with 21 deaths out of 658 confirmed cases.

Fearing that hospitals would be overwhelmed should numbers increase suddenly, the government closed schools in late February. It also barred flights from major infection centres such as China, Iran and Italy on March 11 before closing the airport entirely on March 18.

However, the March 11 decision came only much after Iran and Italy had emerged as the biggest epicentres of the virus outside China, said Maha Yahya, director of the Carnegie Middle East Centre.

Because of Hezbollah’s influence in Lebanon and its strong ties to Iran, this fuelled speculation in local media that the government did not stop flights from Iran for political reasons and that the number of infected patients in Hezbollah strongholds was higher than claimed by the party.

“We just cannot know if the figure can be trusted. Because of the high number of pilgrims and fighters who continued circulating between Iran, Iraq, Syria and Lebanon, it would make sense that there are more than reported. But if there are not, that’s great news,” said Mrs Yahya.

Hezbollah denies under-reporting figures, which are particularly low in south Lebanon. Out of a population of 500,000 in the region, only four people are sick with the virus and two have recovered. Party officials said that all but one of the patients were infected abroad – two in Iran, one in Italy, one in France, and one in Ivory Coast.

“We would not hide numbers,” said Youssef Mughnieh, who heads Hezbollah’s media office in south Lebanon. “That would be detrimental to the public’s health.”

On March 31, Hussein Fadlallah, Hezbollah’s party representative for Beirut, pointed out that the 23 cases in the south of the capital accounted for only 5 per cent of the country’s Covid-19 cases at the time.

However, Hezbollah has been keen to seem inclusive in its Covid-19 response. Its officials say that all their services, from testing for the virus to medical treatment and food aid, are available to everyone for free, including the Syrian and Palestinian refugees who make up roughly one quarter of the country’s population.

Hezbollah’s actual ability to respond to all those in need may yet be tested. Social Affairs Minister Ramzi Msharrafieh said this week than as a many as 70 per cent of Lebanese might need financial or food support.

The government has approved a one-time cash handout of 400,000 Lebanese pounds, or $133 at the current black market exchange rate, to poor families, although the exact number of beneficiaries is unclear. The Social Affairs Ministry announced that it was pausing the programme on Tuesday because of “mistakes” in the list of recipients, before the army started distributing the aid on Wednesday.

Earlier this month, locals from the poverty-stricken southern Beirut suburb of Beirut Hay El Solom told The National that neither Hezbollah nor its local ally Amal had given them food or money.

As always, Hezbollah walks a fine line between showing its strength and being accused of weakening the state, which relies on financial aid from western institutions. The US considers the group a terrorist organisation and has been considering the expansion of sanctions to Hezbollah’s Christian allies this past year.

But for once, Hezbollah might have little interest in extending its control over Lebanese affairs, said Mrs Yahya.

“They are not interested in taking over the Lebanese state. Honestly, it’s a mess. No one wants to deal with it and be responsible for managing an economic crisis, a social crisis and a pandemic to top it all.”