Lebanon’s Bristol hotel forced to shut down over economic crisis 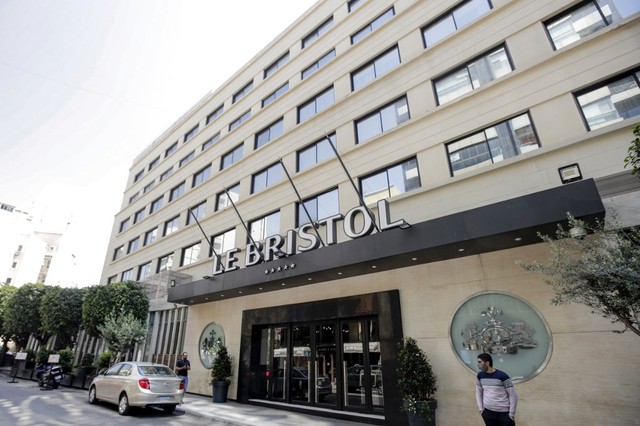 This picture taken on April 18, 2020 shows a view of the exterior of the the five-star “Le Bristol” in the Hamra district of the Lebanese capital Beirut, which was forced to close for this first time since it’s opening in 1951 due to the worst financial crunch since the 1975-1990 civil war, now made more acute by a nationwide lockdown since mid-March because of the COVID-19 coronavirus pandemic. – Designed by French interior designer Jean Royere, Le Bristol boasts the oldest ballroom in Beirut and once housed Lebanon’s first ever skating rink before it was turned into a conference room. Its former guests include the late shah of Iran Mohammad Reza Pahlavi and his wife Soraya Esfandiary-Bakhtiari, American aviator Charles Lindbergh, American jazz trumpeter Dizzie Gillespie, and former French president Jacques Chirac. (Photo by ANWAR AMRO / AFP)
Share:

BEIRUT, Lebanon – A 5-star hotel in Beirut that once hosted royalty and survived the civil war has been forced to close over Lebanon’s economic crisis and coronavirus lockdown, its manager said on Saturday, April 18.

Lebanon is grappling with its worst financial crunch since the 1975-1990 civil war, now compounded by a nationwide lockdown since March 15 to stem the spread of the novel coronavirus.

The crisis has pushed the owners of Le Bristol to close down the landmark hotel after almost 7 decades in business, its general manager Joseph Coubat said.

“It’s because of the economic situation which has become unbearable,” he said.

“Now with the coronavirus, and with the financial problems we are going through in the country, the level of occupancy has fallen very low,” he told Agence France-Presse, saying it was less than 10%.

He said the owners had decided to shut the hotel “while waiting for better days,” but that for the moment the closure was definitive.

It boasts the oldest ballroom in Beirut and once housed Lebanon’s first ever skating rink before it was turned into a conference room.

Le Bristol never closed during the civil war, when it hosted foreign journalists, though it was shuttered for refurbishment between 2013 and 2015, when owners poured millions of dollars into its renovation.

Between 2004 and 2005, the political opposition met there in what was the first large gathering against the then-Syrian presence in Lebanon. The group was dubbed the “Bristol meeting.”

Occupancy at the hotel started dropping from October last year, Coubat said, when a crumbling economy and frustration with the political elite led to an unprecedented anti-government street movement.

After the COVID-19 pandemic reached the country, the airport’s closure from March 19 as part of measures to halt the spread of the virus dealt a further blow to the hospitality sector.

Many hotels have zero occupancy at the moment, the head of the hotel owner syndicate has said.

“It’s catastrophic. Those in charge now need to really think up a rescue plan,” Coubat said, referring a new government struggling to redress the economy since January.

Over the past months, tens of thousands have lost their jobs or part of their salaries in various sectors due to the economic crunch, even as the cost of living has soared.

The value of the Lebanese pound has plummeted by half on the parallel exchange market, and poverty has risen to 45%, according to official estimates.

With a debt equivalent to 170% of its gross domestic product, one of the highest in the world, Lebanon defaulted on its payments for the first time last month.

The country has registered 672 cases of COVID-19, including 21 deaths. The numbers are misleading since only 0.3 % of the people have been tested