After being blamed for bringing Coronavirus to Lebanon, Hezbollah is now trying to stop its spread 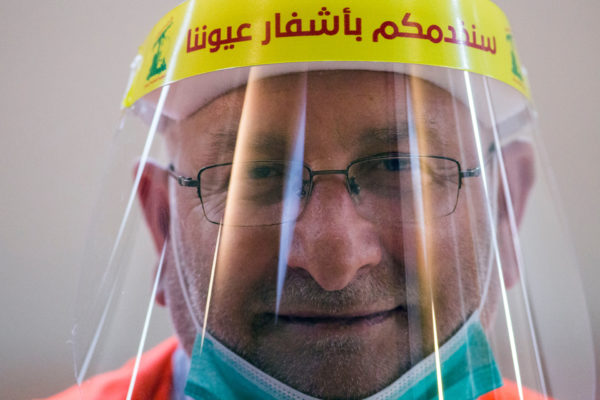 BEIRUT, LEBANON – MARCH 31: A volunteer poses for a portrait while wearing a facemark with the colors and logo of the Hezbollah flag while he works at a Social Security Support Center on March 31, 2020 in Beirut, Lebanon. Lebanon
Share:

Several Lebanese leaders have angrily accused Hezbollah of helping bring coronavirus to Lebanon. It took more than three weeks for the country to halt flights from Iran after a woman who had just returned from Iran emerged as Lebanon’s first confirmed case on February 20. Critics claim Hezbollah was behind the delay, ostensibly to give its members and supporters time to return home, an accusation it denies. Now Hezbollah is trying to stop the spread of the virus as the number of cases continues to rise , but many accuse the party of using coronavirus to exercise more control over the country

Beirut, Lebanon – The Lebanese paramilitary group Hezbollah is marshalling its deep resources in the fight against coronavirus, using a corps of volunteers, doctors and facilities to carve out a prominent role in the crisis-riven state’s response.

The campaign is part of wider efforts by Lebanon’s sectarian parties that are scrambling to show they can help in this emergency.

Analysts say the political elite sees an opportunity to restore community standing that was tarnished six months ago during nationwide protests against corrupt governance and crippling economic troubles.

But the outsized effort by the Iran-backed Hezbollah, a heavily armed Shi’ite Islamist group designated a terrorist organization by the United States and the target of U.S. sanctions, stands heads above the rest in its campaign.

On a media tour in Beirut given by Hezbollah officials on Tuesday the group rolled out one of two new testing centers, a fleet of ambulances – many equipped with ventilators – and an entire hospital re-purposed for coronavirus patients, just part of what it described as a nationwide response.

“The goal is to reduce the pressure on the ministry (of health), hospitals, and the state,” said Hezbollah official Hussein Fadlallah. “We have a volunteer team of over 25,000.”

Lebanon, a country of roughly six million ravaged by a financial crisis that has drained its hard currency and sunk the Lebanese pound, has recorded 463 coronavirus cases and 12 deaths.

Health officials warn that its healthcare system is ill-equipped to rein in an aggressive outbreak that could quickly draw down supplies decimated by the months-long dollar shortage.

“Hezbollah and the rest of the political establishment … see the coronavirus crisis as an opportunity to provide services and present themselves as the parties protecting their communities,” said Mohanad Hage Ali, a fellow at the Carnegie Middle East Center. “Hezbollah is in the lead.”

Long described by its critics as “a state within a state” because of its powerful military force and provision of health and social services, Hezbollah has become more deeply involved in government affairs in recent years.

The Iran-funded group is a significant backer of the government of Prime Minister Hassan Diab, which took office in January, and picked the current and former ministers of health.

Though much of its plan for fighting coronavirus draws on its own hospitals and clinics, Hezbollah has said it will also deploy doctors to government hospitals as needed.

“The level of preparation is the same (as war) but the goals are different,” said Fadllalah.

Other parties – Sunni, Christian and Druze – have pulled together similar initiatives such as sanitizing public spaces, distributing food to the needy and awareness raising.

The Free Patriotic Movement, a Christian party, has procured rapid testing kits from China for use in mobile clinics it will run. Lebanon’s main Druze leader Walid Jumblatt has made donations to hospitals and his Progressive Socialist Party has organized quarantine areas if needed.

The Shi’ite Amal Movement, led by Parliament Speaker Nabih Berri, is involved in parts of Hezbollah’s campaign as well as its own. Berri ordered the government to pay arrears to municipal councils to help them cope with local outbreaks.

Hezbollah’s measures include a call center, three quarantine centers with 170 beds and capacity to scale up to 1,000, and 64 “social committees” to monitor the needs of families hit by the economic fallout, Fadlallah said.