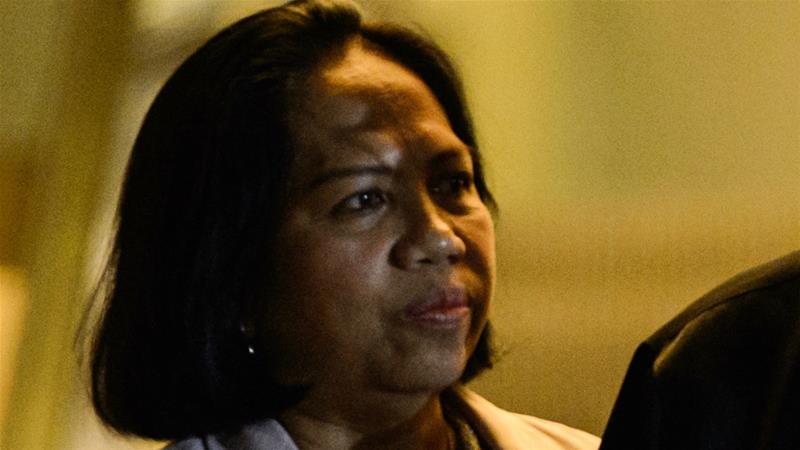 Beirut, Lebanon – The Philippine ambassador to Lebanon, Bernardita Catalla, a strong defender of the rights of Filipino domestic workers in Lebanon, has died at the age of 62 from complications arising from the coronavirus infection.

A statement from the Philippines Department of Foreign Affairs announced Catalla’s death on Thursday, saying she had worked as a diplomat for 27 years, serving in multiple capacities.

“Bernie, as Ambassador Catalla was fondly called, has always lent a helping hand, to her family, friends and colleagues,” the statement said. “Her ever ready smile and infectious laughter may have been extinguished but her dedication to our country will always be there as a guiding light for all members of the Philippine foreign service.”

The diplomat’s death takes the death toll from COVID-19 in Lebanon to 16. There are 494 confirmed cases in the country.

The government has since March 15 implemented a partial nationwide lockdown over COVID-19, shutting down the international airport to passenger traffic and setting a curfew between 7pm and 5am.

Ambassador Catalla was known in Lebanon for her hands-on approach. In recent months, she oversaw free mass repatriation aimed at more than 1,000 domestic workers whose jobs had become untenable due to the country’s deep economic crisis that led the local currency to lose more than 40 percent of its value.

By March 11, 527 people had been returned under the programme, according to statistics from the embassy, the vast majority of whom were female domestic workers.

Tens of thousands of Filipinas are employed in Lebanon under the country’s notorious kafala system, which has been shown to facilitate widespread abuse by employers by giving them vast powers over domestic workers.

But Filipinas in Lebanon generally enjoy better working conditions and higher wages than workers from other parts of the world, due in part to the advocacy efforts of the local embassy.

Lebanon’s Labour Minister Lamia Yammine tweeted her condolences over Catalla’s death. “I consider her death a loss for Lebanon as well as the Philippines, as she was working to promote and consolidate relations between our two countries in various fields,” Yammine said.

‘A loss for the Philippines and Lebanon’

Condolences to Catalla’s family poured in on social media from Filipinos and Lebanese alike.

“You will always be remembered madam coz [sic] u really did a very good job you have a golden heart … We Filipino workers in Lebanon salutes and bows our head for your bravery,” Facebook user Honey Glenn Delacruz Navales said.

Hanan Shaar, a professor of Arabic who taught Catalla the language over the past year, becoming good friends with her, told Al Jazeera she was “incredibly active and humble more than anything else”.

Shaar said they had suspended classes over the past few months because Catalla became busy with the repatriation programme. But she still managed to “learn the language and was reading and writing – she got her official certificate last month”.

Shaar recalls that Catalla marked her birthday in February by leading a prayer for Lebanon and the Philippines. “It’s a loss for the Philippines of course, but also for Lebanon. She was a model official who cared about her people, unlike the criminals we have here who are letting their people starve,” Shaar said.

The Lebanese government has struggled to provide assistance to those most in need, with 45 percent now living below the poverty line and 22 percent in extreme poverty, on less than $2.40 a day.

The cabinet earlier this week pledged to provide families most in need with a payment of 400,000 Lebanese pounds ($264), according to current exchange rates.

The coronavirus outbreak has worsened an already dire economic situation in the country and Agriculture Minister Abbas Mourtada earlier this week said Lebanese should plant their gardens with food in an effort to attain “food security”.