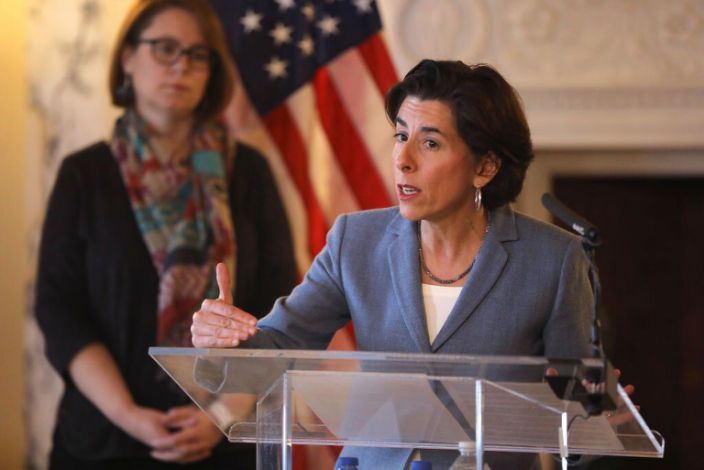 Rhode Island Gov. Gina Raimondo announced during a press conference on Friday that the state would take drastic steps to “pin-point” individuals who had recently traveled to New York in an attempt to stem the spread of COVID-19, the disease caused by the novel coronavirus.

“Right now we have a pin-pointed risk that we need to address and we need to be very serious. And that risk is called New York City,” she said. Over the past week, New York has become the epicenter of the coronavirus crisis in the United States. As of Saturday afternoon Eastern Time, New York had at least 52,318 confirmed cases of COVID-19, according to a tracker by Johns Hopkin’s University; that’s nearly half of the at least 115,547 cases in the entire United States. In comparison, Rhode Island currently has at least 203 confirmed cases, per the tracker.

She announced that starting on Friday afternoon, state police will monitor highways and pull over anyone with New York plates to ask them for their contact information. Officials will order “you into quarantine if you plan to stay in Rhode Island,” she said.

Raimondo also announced that, starting Saturday, the National Guard will work with local law enforcement to go “door-to-door” in the state’s coastal communities, asking if anyone has come from New York and requesting their contact information. She said officials will order any individuals who have come from New York to quarantine for 14 days.

“Obviously we will be doing out best to target those homes where we know people are likely to have come from New York,” she said.

Texas, Maryland, South Carolina and Florida have all also ordered anyone coming from New York to self-quarantine for two weeks. On March 24, President Donald Trump also requested anyone who has recently been in New York self-quarantine for 14 days, although that guidance is not enforceable by law.

Raimondo also announced that all hotels, renters and rental companies will be notified of this quarantine order in writing, and will be asked to provide the guidance to their renters.

“I know this is unusual. I know it’s extreme. And I know some people don’t agree with it. And it’s absolutely not a decision that I make lightly,” she said.

“We’re not shutting down our borders, per se,” she continued. “But what we’re saying is, if you want to seek refuge in Rhode Island, you must be quarantined.”