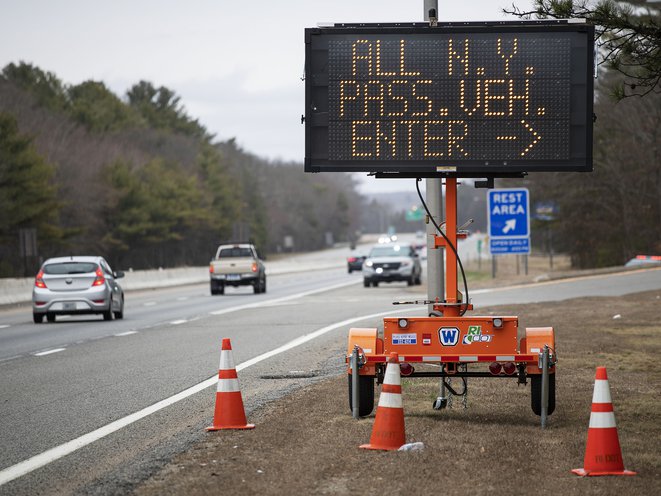 Sign instructs motorists with New York license plates to pull over at a checkpoint on I-95 over the border from Connecticut where New Yorkers must pull over and provide contact information and are told to self-quarantine for two weeks, in Hope Valley, R.I. DAVID GOLDMAN/AP/SHUTTERSTOCK
Share:

While there are cases of the novel coronavirus in every state in the U.S., the northeast has the most cases—New York and New Jersey combined account for half of the country’s total at present. This prompted President Donald Trump to float the idea of a “quarantine” on New York, New Jersey, and Connecticut on Saturday morning, but the concept was quickly shot down by the three states’ governors. New York Governor Andrew Cuomo also ominously pointed out, “You think the Dow Jones, the stock market has gone down? [A quarantine] would [make it] drop like a stone.”

Trump reversed course by Saturday evening, saying that only a “strong Travel Advisory administered by the Governors, in consultation with the Federal Government” would be issued, from the Centers for Disease Control and Prevention.

“Due to extensive community transmission of COVID -19 in the area, CDC urges residents of New York, New Jersey, and Connecticut to refrain from non-essential domestic travel for 14 days effective immediately,” the advisory said. “This Domestic Travel Advisory does not apply to employees of critical infrastructure industries, including but not limited to trucking, public health professionals, financial services, and food supply.  These employees of critical infrastructure, as defined by the Department of Homeland Security, have a special responsibility to maintain normal work schedules.  The Governors of New York, New Jersey, and Connecticut will have full discretion to implement this Domestic Travel Advisory.”

Florida Gov has set up checkpoints on I-95 to stop drivers from the NYC area.

Instead of trying to scapegoat New Yorkers here’s a thought.

Look in the mirror.

This is the same guy who allowed thousands of spring breakers to wildly party on Florida beaches for days.

Florida Governor Ron DeSantis reportedly planted the seed of the quarantine idea in Trump’s head. The Washington Post reports, “The idea for the quarantine came about after Florida Gov. Ron DeSantis (R) complained to Trump that people from the New York metro area were pouring into his state, according to two White House officials who spoke on the condition of anonymity to describe the private deliberations. Administration aides spent time Saturday explaining to Trump the quarantine would be impossible to enforce and could cause more problems, the officials said.”

DeSantis did not enact any statewide measures to limit activities at Florida beaches during spring break, leaving it up to municipalities to decide. In fact, he refused to close beaches and said only gatherings of 10 or fewer people could occur on March 18th.

Rhode Island, which had stationed police officers and members of the National Guard to look for people from New York by various means of transport, is reportedly stopping that enforcement effort. On Friday, Governor Gina Raimondo had issued an executive order saying that anyone who was from New York state—or had taken a domestic or international flight—must quarantine for 14 days.

RI Gov. Gina Raimondo: "Anyone returning to Rhode Island from a domestic or international flight must self-quarantine for fourteen days." pic.twitter.com/vu1Whb446S

Cuomo was surprised by the action, at first calling it “sensationalist” news when informed of Rhode Island’s move during his Saturday afternoon press conference.

RI State Police and National Guard are having passenger cars from New York stop at this rest stop on I-95 north to register them as someone who needs to self quarantine for two weeks if staying in RI. @wpri12 pic.twitter.com/v3PN04TAPM

By the evening, Cuomo said on CNN, “I think that’s a reactionary policy and I don’t think that’s legal. And we’re talking to Rhode Island now. If they don’t roll back that policy, I’m going to sue Rhode Island, because that clearly is unconstitutional… I understand people are nervous and people are anxious and this is a frightening situation, but we have to keep it in focus, and we have to keep the ideas and the policies we implement positive, rather than reactionary and emotional.”

“I think what they did was wrong, I think it was reactionary, I think it was illegal, but we’ll work it out amicably I’m sure. We have conversations going back and forth. No state should be using police to prohibit interstate travel in any way,” he added.

Those conversations appear to be happening in earnest: