Lebanon Is broken , the protesters need to focus on fixing it 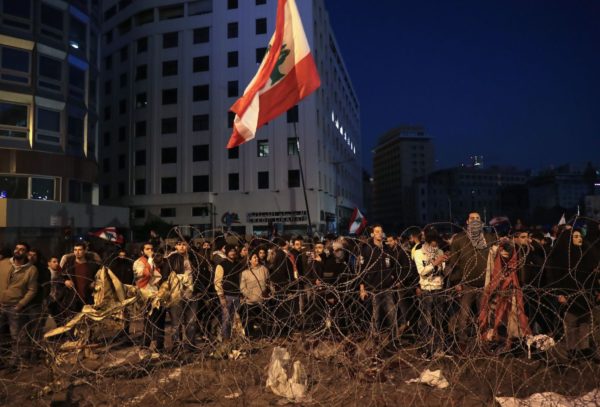 The mannequins at the Chanel showroom in downtown Beirut are hidden behind steel doors due to fears that protesters could unleash their anger on such potent symbols of inequality. The historic Omari Grand Mosque is barricaded with layers of concertina wire to hold off the crowds of protesters outside. Similarly, the parliament building is blocked with a thick concrete wall to protect it from the anger of the public. These are the relics of several months of protests against Lebanon’s political system and its ruling elite.Trending Articles

Martyrs’ Square is the epicenter of the now 4-month-old protests. Thousands of people who gathered there called for the removal of the elite political class, an early election, and an end to the sectarian power-sharing system that has institutionalized clientelism and corruption in the country. Now, the gatherings are smaller, and the chants of “thawra”—the Arabic word for revolution—are much softer. Arrests do continue, but some protesters believe that the real reason behind their dwindling numbers is fatigue combined with a growing sense of hopelessness about the movement’s future.

There is no doubt that the protest movement succeeded in articulating a widespread sense of frustration with a system that has routinely failed to deliver jobs, affordable health care, and education. But the protesters have so far been unable to articulate a coherent long-term strategy for change—and that’s because it never bothered to develop one.

In January, almost three months after Prime Minister Saad Hariri resigned, a new government fit with presumably more responsive technocrats took power, but this has put protesters in an awkward position. They got their new government, and some feel they should hold back and give it a chance. But most protesters agree that the new government is little more than a shadow body representing the entrenched interests of Hezbollah and its allies, both of which took a stand against the protesters.

When the protesters first took to the streets, Hezbollah issued statements expressing sympathy with their demands. This was in line with its traditional claim of fighting to defend the rights of working-class Lebanese (who predominantly come from Lebanon’s Shiite community). But it could only go so far. Over the course of its existence, Hezbollah has become an entrenched actor in Lebanese society, and its interests are now, somewhat ironically, intertwined with those of the establishment. It made the pragmatic decision to stand with the protesters at the outset, but supporting the sweeping changes they demanded threatened its own standing. When negotiations to name Hariri’s replacement got underway, Hezbollah leader Hassan Nasrallah made it clear that he did not want the protesters to be involved. Now, in addition to clashes between the police and the protesters, there is also regular street fighting between protesters and Hezbollah motorbike gangs.

Ali, a Shiite from the Hezbollah stronghold of Dahiye who declined to give his last name, was threatened by the group’s supporters because he was active in the protests. He joined the demonstrations on the first day, helping to block roads, paint graffiti, and chant slogans. “I had been looking forward to it because we can’t have change without a revolution,” he said. But he is increasingly worried about the protests losing steam. “They made a new government. It’s like 20 random people agreed to give 20 random people some jobs. It gives me the feeling that we have been through so much for nothing.”

So far, the protests have been impromptu and lacking any meaningful political patronage—little more than a leaderless outburst of public anger. Although this style of politics initially gave the movement a certain degree of credibility, it has not been conducive to advancing a defined plan and vision.

As the new status quo begins to settle, the protesters will need to develop an organized political strategy to unseat the ruling elite at the ballot box. One of the main obstacles they face is finding a way to overcome voters’ default sectarian impulses. Otherwise, the movement could split along sectarian lines, putting it at risk of being outmaneuvered by a ruling elite that is far more politically experienced than the protesters are.

The Lebanese elite is used to facing off against mass movements. During the early days of the civil war in the 1970s, an alliance of leftist parties demanded an end to the sectarian power-sharing system of government. The same demand was made during mass protests in 2005 and then again in 2015. Although political leaders do have the power to dissolve the confessional system at will, their collective interests are inextricably tied to the status quo, and they have resisted each successive demand for change.

The protesters face not just a politically astute enemy but also an armed one. The supporters of Hezbollah and the Amal Movement, one of its main allies, attacked the protesters several times during the last few months. There has been a palpable fear of Hezbollah taking over the streets, as it did in 2008 when its hold over communications and Lebanon’s airport was challenged.

The threat posed by Hezbollah exacerbates one of the protest movement’s main organizational problems: its lack of a leadership structure. Khalil Helou, a retired Lebanese Army general and one of the most prominent voices of the protest movement, said the reason the protesters have not identified leaders is because of the fear that they may be assassinated. “The forces we are dealing with are dangerous, and by the ‘forces,’ I mean Hezbollah,” he said. “They have killed opposition voices in 2005. Nothing is stopping them now.”

But that problem goes deeper than Hezbollah, and the movement is disadvantaged by its own fragmented base of support. Helou admitted that the movement has not coalesced under a single umbrella “because [the protesters] come from different backgrounds, different social milieus,” he said. “They don’t have political maturity.”

The protesters may share the same broad objectives, but their specific demands are oftentimes irreconcilable.

Some are demanding cuts to the bloated public sector, but others reject all forms of austerity. The final form the new political system would take is also in dispute. One section advocates for a basic nonsectarian representative democracy, but others suggest a more radical solution, doing away with any form of hierarchy and instituting a direct democracy under which people vote on all policy measures via referendum.

Lina Hamdan, a member of the coordination committee of the protests, pointed to another paradox. “We are asking the same ruling elite whom we want to get rid of to change the system,” she said. Many protesters say the political elite would never willingly give up power, and a few of them advocate taking extreme measures to overthrow the government. Most of the others worry that pursuing that route risks the widespread popularity they have attained.

These are the contradictions protesters must resolve before they can realistically hope to force change. It begins with the leadership. Although the leaderless nature of the movement helped strengthen its initial appeal, if it continues to operate without the direction of a single person (or group of people), it risks losing its momentum because a successful political movement eventually requires a recognizable leader to give direction, enforce a policy agenda, and take decisive action. The movement also needs to articulate an agreed set of objectives in order to help resolve ideological discrepancies among its members’ widely disparate viewpoints and to focus the movement’s efforts on a set of identifiable goals. More than that, the movement needs to agree on a long-term strategy. It must decide if it will continue to campaign in the streets, seek change through elections, or take more radical action. All of these changes will necessarily lead some protesters to feel disenchanted and leave the movement, so the hypothetical leadership will have to pursue a course of action that can both minimize those losses and withstand them.