Assad pledges to continue onslaught that has displaced 900,000 Syrians 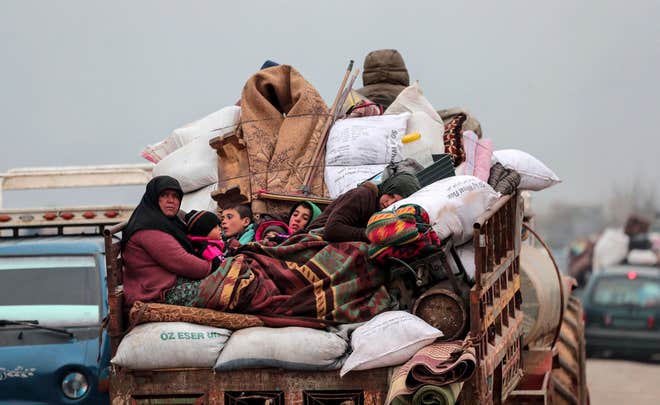 Syrian families take what they can of their possessions as they flee the area (AP)
Share:

Syrian President Bashar al-Assad has pledged to continue the onslaught on the country’s northwest, the war-torn country’s last major rebel stronghold, saying the war was not yet over but a “complete victory” was in sight.

The fierce Russian-backed government offensive has displaced 900,000 people since the start of December, according to the United Nations, which warned on Monday that the “horrifying” crisis was forcing those fleeing to sleep outside in freezing temperatures and had resulted in babies dying of cold as camps are full.

But in a rare address carried on state television on Monday, al-Assad congratulated his forces for recent gains that led to them consolidating control over Aleppo province and pledging to press ahead with a military campaign in Idlib province.

“But it means that we rubbed their noses in the dirt as a prelude for complete victory and ahead of their defeat sooner or later.

“We should not rest, but continue to prepare for coming battles, and therefore, the battle of liberating the Aleppo countryside and Idlib will continue.”

The offensive has disrupted the fragile cooperation between Turkey and Russia, which back opposing sides in the conflict but have collaborated towards what they say is a political solution to the nearly nine-year war.

Ankara, which supports several Syrian rebel groups in the northwest, has been outraged since Syrian attacks in Idlib province killed 13 Turkish troops in two weeks. It has called on Moscow to stop the attacks, warning it would use military power to drive back Syrian forces unless they withdraw by the end of the month.

Turkey has, so far, sent thousands of troops and hundreds of convoys of military equipment to reinforce its observation posts in Idlib, established under a 2018 de-escalation agreement with Russia.

In his address, al-Assad also alluded to Ankara’s warning, saying the offensive will go ahead despite “empty voices that are coming from the north”.

Al Jazeera’s Hashem Ahelbarra, reporting from the Turkey-Syria border, said al-Assad appeared to want “to tell his own people that this [offensive] is something that might take longer than expected.

“Particularly if Turkey continues its involvement and there is no deal between Turkey and Russia about implementing a ceasefire,” Ahelbarra added.

Rami Khouri, a professor of journalism at the American University of Beirut, said it is not clear what al-Assad’s defiant message means for Syria’s relationship with Turkey.

Khouri said that Turkey was unlikely to engage in conventional warfare with Syria because it would threaten its own ties with Russia.

“The Turkish-Russian relationship is way more important than the Turkish-Syrian government [relationship,” he said.

Separately, Mark Lowcock, the UN head of humanitarian affairs and emergency relief, warned on Monday that the violence in the northwest was “indiscriminate”.

“Health facilities, schools, residential areas, mosques and markets have been hit. Schools are suspended, many health facilities have closed. There is a serious risk of disease outbreaks. Basic infrastructure is falling apart,” he said in a statement.

“We are now receiving reports that settlements for displaced people are being hit, resulting in deaths, injuries and further displacement.”

He said a massive relief operation under way from the Turkish border has been “overwhelmed. The equipment and facilities being used by aid workers are being damaged. Humanitarian workers themselves are being displaced and killed.”