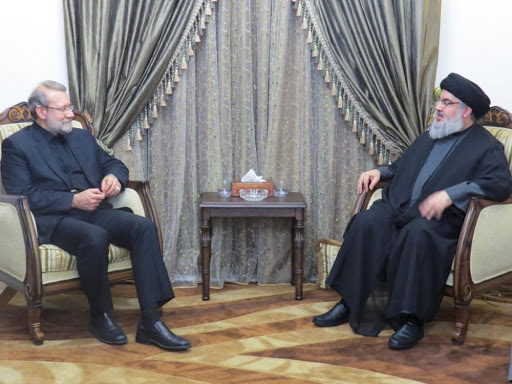 BEIRUT: Iran’s Speaker Ali Larijani’s visit to Lebanon was not welcomed by political leaders opposing Hezbollah, in what was the first official foreign visit by a senior politician to Beirut since the formation of a new government led by Prime Minister Hassan Diab. Apart from Diab, Larijani met with Lebanese President Michel Aoun and Speaker Nabih Berri and Hezbollah leader Hassan Nasrallah.

“He (Larijani) conveyed to Aoun a letter from the Iranian President Hassan Rouhani regarding Iranian-Lebanese ties, and invited him to visit Tehran,” said Aoun’s media office.

“Lebanon is an influential country in the region. The relations between our two countries have always been based on friendship and goodwill. Iran is continually seeking to see the brotherly Lebanon as a free, sovereign and independent country,” said Larijani at Rafik Hariri International Airport.

Reacting to his visit, former Minister Ashraf Rifi said: “Keep your hands off Lebanon for it to stay free, sovereign and independent. The project of Iranian hegemony and trusteeship will fall sooner or later because it opposes the people’s freedom and dream of a better future.

“Liberating Lebanon from your hegemony is the gateway to salvation. Iran has only offered Lebanon destruction and blood. Do not believe the delusion of dominating over Lebanon through your tool’s weapons,” he added.

Member of Parliament Nadim Gemayel, who is a member of the Kataeb Party, said: “Welcome to your mini-state and thank you for your wishes. Start by keeping your hands and evil away from Lebanon. Tell that to Hassan Nasrallah, the chief of Wilayat Al-Faqih in our country.

“Our situation today is a direct result of Hezbollah’s corruption, illegal weapons and indiscriminate wars. They led investors and the international community to lose confidence in the country and brought economic pressures and sanctions,” he added.

Keep your hands off Lebanon for it to stay free, sovereign and independent. The project of Iranian hegemony and trusteeship will fall sooner or later because it opposes the people’s freedom and dream of a better future.

Nasrallah, the secretary-general of Hezbollah, had previously given a speech calling for a boycott of US goods in Lebanon. In it, he had stated his confidence that Iran would make up any shortfalls, and was ready to provide Lebanon’s armed forces with necessary arms and equipment.

The offer was echoed by the Iranian Minister of Foreign Affairs Mohammad Javad Zarif during an official visit to Beirut.
“My country is ready to provide assistance and cooperate with the Lebanese government in all fields. We are waiting for this desire to be shared by the Lebanese side,” he said.

The Iranian offer sparked a debate in Lebanon, as acceptance would be considered a challenge to US sanctions on Iran and a deviation from Lebanon’s disassociation policy.

Nasrallah reiterated the offer and suggested resorting to China to resolve the country’s chronic crises in a speech last November.

Larijani’s visit on Sunday coincided with another move by Hezbollah, to unveil a monument dedicated to Iranian Gen. Qassem Soleimani, killed in a US drone strike in January, on the Southern Lebanese border with Israel.
Former Prime Minister Fouad Siniora reacted by saying: “The unveiling of the monument is an unhelpful move and an unwise action.”

His arrival also comes 2 days after Lebanon commemorated  the 15th anniversary of the assassination of former Lebanese PM Rafik Hariri who was killed along with 22 others in a massive bomb on Feb 14 2005.

5 Hezbollah operatives are being tried in absentia by the Special Tribunal of Lebanon (STL) over Hariri’s murder. Hezbollah refuses to hand over the Hezbollah suspects to the the UN backed STL