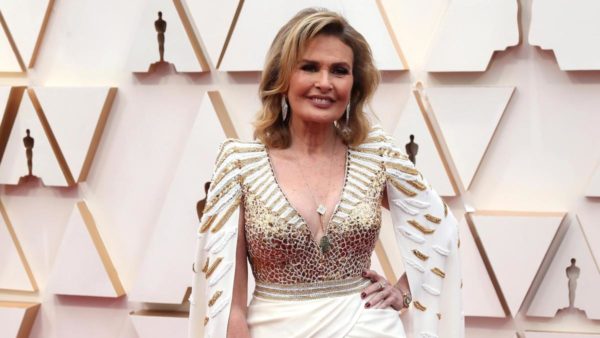 Yousra arrives for the 92nd annual Academy Awards ceremony at the Dolby Theatre in Hollywood, California, USA, 09 February 2020. The Oscars are presented for outstanding individual or collective efforts in filmmaking in 24 categories. EPA/DAVID SWANSON
Share:

She was invited to join the ranks of the Academy of Motion Picture Arts and Sciences last year, and so Youssra was one of the few celebrities from the Arab world to attend the Oscars this year.

As a member, the Egyptian actress and singer was eligible to vote for this year’s award winners, and attended the Academy Awards on Sunday, February 9 in Los Angeles.

For the A-list occasion, the Al-Mansy star turned to Lebanon’s Zuhair Murad, sporting a look from the designer’s spring 2020 couture collection.

Featuring a glimmering golden bodice, artfully draped cream skirt, and dramatic caped, embroidered sleeves, the gown had been customised from the runway version, which featured cut-outs around the midriff.

Yousra, 68, also accessorised with pieces from Nara Fine, a Thai-founded brand, and carried an elegant box clutch from La Rose De Sim, a Lebanese accessories label. Her look was put together by Egyptian stylist and fashion designer Mai Galal.

The Cairo-born star was inducted into the Academy in July 2019, along with other regional talent of the film industry, including Egyptian producer and director Karim Amer, Syrian director Talal Derki, Tunisian director Raja Amari and Yemeni director Khadija Al-Salami.

The appointments form part of a growing wave of diversification within the Academy, with 2019 marking the first time more women were invited to join than men.

Youssra, who has appeared in more than 50 films since making her big screen debut in 1977’s Fatah Tabhath Aan Al-Hob, is also a UN Goodwill Ambassador.

The actress shared some behind-the-scenes shots ahead of the ceremony, as she geared up for the bash in Los Angeles.

The actress posed on Hollywood’s Walk of Fame with Raya Abirached, revealing that she would appear on an episode of the Lebanese TV presenter’s show, Scoop With Raya.