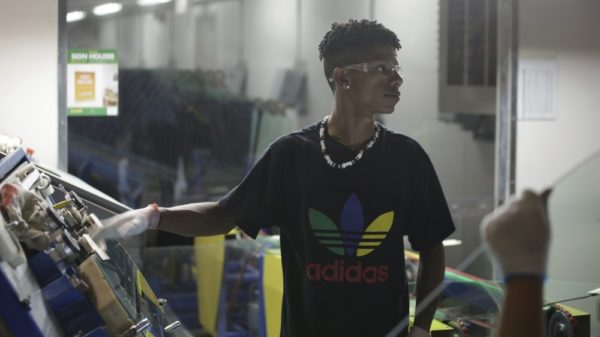 This image released by Netflix shows Zach Ray at work at the Fuyao Glass America factory in Dayton, Ohio, in a scene from the Oscar-nominated documentary “American Factory.” (Netflix via AP)
Share:

The Netflix film is about an Ohio auto glass factory that is run by a Chinese investor. It explores many issues, including the rights of workers, globalization and automation.

“American Factory” beat out “Honeyland,” “The Cave,” “The Edge of Democracy” and “For Sama.” Steven Bognar and Julia Reichert, directors of “American Factory” acknowledged the work of their fellow nominees on Sunday. “We are inspired by you guys,” said Reichert.

Barack Obama in a tweet Sunday congratulated the filmmakers “for telling such a complex, moving story about the very human consequences of wrenching economic change. Glad to see two talented and downright good people take home the Oscar for Higher Ground’s first release.”

The film is about the Fuyao plant, bought by Chinese industrialist Cao Dewang, which employs some 2,200 American and 200 Chinese workers. The film gives a close-up look at how the cultures adjust to one another. Tensions rise when the factory doesn’t initially meet production goals, culminating in a bitter fight over the right to unionize.

Reichert noted that her film is about an Ohio plant but it could be from anywhere “people put on a uniform, punch a clock, trying to make their families have a better life. Working people have it harder and harder these days. We believe that things will get better when workers of the world unite.”

The name of the Obamas’ company, Higher Ground, flashes by in the opening credits, but the Obamas themselves aren’t mentioned anywhere. Neither is President Donald Trump.

For full coverage of the Oscars, visit: https://apnews.com/AcademyAwards.