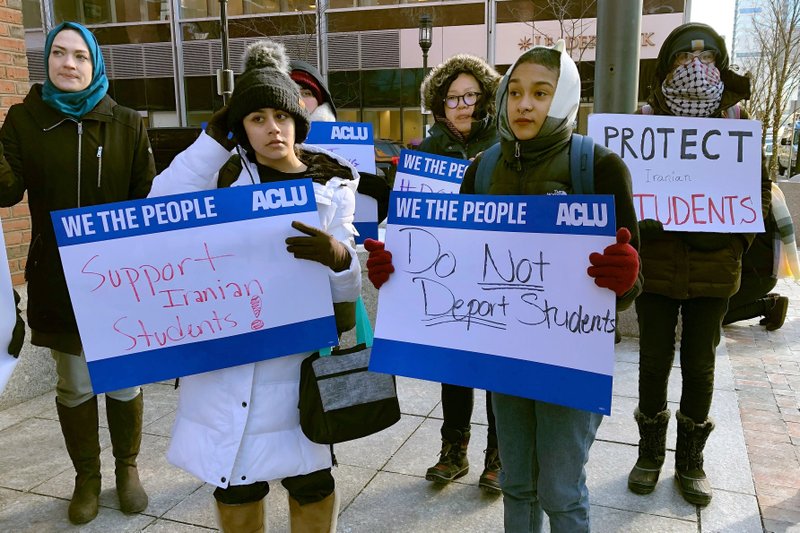 Protesters stand outside the federal courthouse where a hearing was scheduled for Northeastern University student Shahab Dehghani, Tuesday, Jan. 21, 2020, in Boston. Dehghani arrived on a flight into Boston on Monday but was detained by U.S. Customs and Border Patrol at Logan International Airport and then was deported. (AP Photo/Philip Marcelo)
Share:

BOSTON (AP) — Two college students from Iran have filed civil rights complaints with the U.S. Department of Homeland Security, saying they were mistreated and illegally denied entry into the country by federal officials at Boston’s Logan International Airport.

Shahab Dehghani, who attends Northeastern University, and Reihana Emami Arandi, who had been set to start classes at Harvard University, recently filed separate complaints with the agency’s civil rights office, requesting the agency investigate the conduct of Customs and Border Protection officials.

The students say federal officials detained and interrogated them for hours at the airport before concluding they planned on staying in the country longer than their temporary visas allowed.

The students maintain they had no intention of overstaying their visas and that federal officials provided no proof supporting their conclusions.

“I couldn’t and still cannot believe how I was treated and why I received such behavior,” Arandi said in her complaint. “I have never had any interest in or intention to stay in the U.S. for the long term. In fact, Harvard is the only school in the U.S. I even applied to. It doesn’t make sense for anybody intending to immigrate permanently to rest their hopes on one highly competitive program at Harvard.”

Arandi and Dehghani are among at least ten Iranians denied entry into the U.S. since August. Seven of those had flown into Boston’s airport.

In a complaint filed Monday, Dehghani’s lawyers argue he was admitted to the U.S. three times in recent years to study in Boston and that his most recent student visa was issued after nearly a year of vetting by the State Department.

The 23-year-old economics and math student, whose full name is Mohammad Shahab Dehghani Hossein Abadi, was also prevented from communicating with his attorneys during questioning and subjected to a “threatening and uncivil interrogation” that focused on his religious and political beliefs, according to the complaint.

Federal officials purposely ignored an emergency court order temporarily staying his removal until the case could be heard in court and forced him to board a flight bound for Paris, Dehghani’s lawyers argue.

“This entire situation is unacceptable and was handled in an utterly unprofessional manner,” the complaint concludes. “This behavior by members of Customs and Border Protection cannot stand.”

Arandi, a 35-year-old incoming graduate student at Harvard’s Divinity School, said in her complaint filed Jan. 30 that she was detained at Logan Airport on Sept. 18 and questioned for nearly eight hours about her work, family, travel and opinions about recent events in the Middle East.

She said officers also searched and confiscated her luggage, laptop and cellphone and did not allow her to make any calls, including to officials at Harvard.

Arandi said she also didn’t understand the legal implications of declining to sign a statement given to her by officials, which has now resulted in her being banned from entering the U.S. for five years.

She said in her complaint that she had hopes to earn a master’s degree at Harvard so she could eventually pursue a career in research, teaching or humanitarian work in the Middle East or North Africa.

Civil rights groups say Iranians have been targeted for extra screenings and interrogations at airports ever since President Donald Trump issued a ban on travelers from several predominantly Muslim countries in 2017, including Iran.

But they say the targeting has only worsened as relations between the U.S. and Iran have deteriorated, culminating in the U.S. drone strike that killed one of Iran’s top generals last month.