UK ’s productivity decline is the worst in 250 years 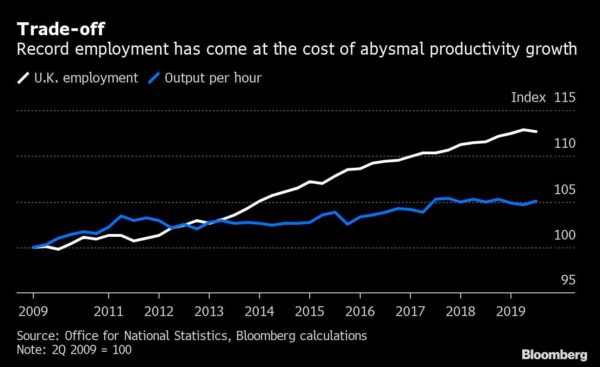 The U.K.’s worst productivity slump in a quarter of a millennium may be caused by a “perfect storm” of three factors, according to a study to be published this week.

Productivity was almost 20% below its pre-2008 path in 2018 — the worst slowdown since 1760-1800, as the Industrial Revolution took hold. The present-day malaise may have been caused by the end of the information and communications technology boom, the financial crisis, and Brexit.

It’s a “shockingly bad” performance, said Nicholas Crafts, who co-authored the paper with Terence Mills, researchers at the University of Sussex and Loughborough University. The findings will published by the National Institute Economic Review on Feb. 6.

Though technology gave a substantial boost to productivity around the turn of the 21st century, it contributed less than a quarter of that in the decade since 2008.

A new revolution may be on the horizon with artificial intelligence but this has yet to have a significant impact, the economists said.

At the same time, Brexit has meant top managers have had to turn their focus to planning, and also led to a relative shrinking of highly productive exporters compared with less efficient domestically orientated firms.

To contact the reporter on this story: Lucy Meakin in London at lmeakin1@bloomberg.net

To contact the editors responsible for this story: Paul Gordon at pgordon6@bloomberg.net, Brian Swint

For more articles like this, please visit us at bloomberg.com