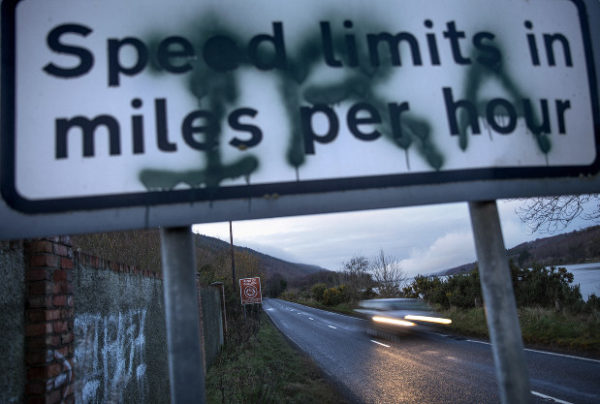 A sign on the border between Northern Ireland and the Republic of Ireland, spray painted with the initials of the Irish Republican Army, alerts drivers to the change in miles per hour for speed limit postings, on Dec. 17, 2019, in Newry, Northern Irel
Share:

BELFAST, Northern Ireland (AP) — The border was drawn in 1921, splitting communities and sometimes property, as the British government sought to create a home for the majority Protestant population of Northern Ireland at a time when the largely Catholic Republic of Ireland won its independence.

Today, that 310-mile (500-kilometer) frontier is largely invisible. The only way motorists know they have crossed into Northern Ireland is from the speed limit signs, which use miles per hour measurements, rather than the metric system used in the south. Keen observers might notice a slight change in the pavement as well.

As Brexit takes effect Friday, residents on both sides of the border are concerned about protecting the relative peace and prosperity after the 1998 Good Friday Agreement. That accord helped end three decades of sectarian violence between paramilitary groups that wanted to reunify Ireland and those who insisted the six counties of Northern Ireland should remain part of the U.K.

Lisa Partridge, a 28-year-old tour operator raised in a British military family, remembers how it was “completely normal to check under the family car for a bomb every morning before you went to school.”

“Nobody would want to go back to that life,” she said.

Central to the deal was the fact that both the U.K. and the Republic of Ireland were EU members, which allowed authorities to tear down hated border posts that had slowed the passage of people and goods as police and soldiers tried to halt the flow of arms and militants. With the end of onerous border controls, trade flowed freely between north and south spurring economic development in both communities.

The British and Irish governments have promised to preserve those gains, but people on both sides of the border are concerned that Brexit may re-ignite tensions.

Signs of the conflict, known here as “The Troubles,” are still evident, even if rust and moss have softened their hard edges.

In the village of Belcoo in Northern Ireland, an old railway bridge blown up by the British army sits partially submerged in the river that separates Northern Ireland from the town of Blacklion in the Irish Republic. An old customs post splits the small village of Pettigo between north and south. In Belfast, “peace walls” still seek to prevent violence by separating Protestant and Catholic neighborhoods.

To ensure there would be no hard border between north and south, British Prime Minister Boris Johnson agreed to different rules for trade between Northern Ireland and the EU than those that apply to the rest of the U.K.

Unionists see this as weakening the ties between Northern Ireland and the rest of the U.K., raising concerns that the reunification of Ireland is now more likely.

“This is Britain. (It) says so on the map,” said David Reid, 33, walking in Belfast with his 1-year-old son in the shadow of a peace wall that separates his Protestant community from a Catholic one. “Me personally, it just doesn’t feel like it. It feels like you’re down in Ireland.”

On the other side of the border in Castlefinn, in Ireland’s County Donegal, Tom Murray runs three pharmacies and says his primary goal is to protect the economic gains of the last two decades.

“I think Ireland should always be a united country and should be free of the shackles of Britain,” said Murray, 46. “But at the same time, we have to accept that there’s 1 million people living a mile away who identify as British. I think we have to protect their identity, their culture, their Britishness every bit as much as we have to protect my Irishness. Otherwise it just won’t work.”

Gerry Storey, 83, of the Holy Family Boxing Club in Belfast has been working to bridge the divide by bringing Protestant and Catholic youths together in the boxing ring.

“When you come in here, you don’t talk politics. You don’t swear. And there’s no football jerseys,” Storey said. “In here everybody is treated fairly and squarely. And it doesn’t care who or what you are.”