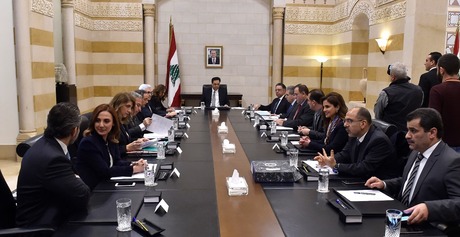 Prime Minister Hassan Diab is shown chairing the meeting of the panel tasked with drafting a new ministerial statement .
Share:

Prime Minister Hassan Diab has been chairing for seven consecutive days the meetings of the panel tasked with drafting a new ministerial statement .

Usually the statement is political and in most cases it is aimed at stating Hezbollah ‘s favorite formula ” People + army + resistance .

“The PM noted that the Lebanese are waiting for (government) action and results. He said the policy statement must be clear and specific without insinuating everything is going well,” in Lebanon, Information Minister Manal Abdul Samad told reporters in her first statement as minister after the first meeting last Friday .

The committee is headed by Diab and comprises the deputy PM and the ministers of finance, foreign affairs, justice, economy and trade, environment and administrative development, information, youth and sport, telecom, industry, and social affairs, and the secretary general of the council of ministers and director general of the presidential palace, NNA reported.

After Thursday’s meeting, the Minister of Information Manal Abdul Samad made the following statement: “In the meeting of the Ministerial Committee , Prime Minister Dr. Hassan Diab confirmed that the committee has come a long way in drafting the statement and hoping to to finish drafting the statement before the end of this week in order to present to the Council of Ministers early next week for approval. Following which it will be presented to the parliament for the vote of confidence.

The International Support for Lebanon (ISG) called last week on Diab’s new government to adopt a ministerial statement with the “necessary substantial, credible and comprehensive policy package of measures and reforms that can address the demands of the Lebanese people.”

The International Support Group brings together the United Nations, the governments of China, France, Germany, Italy, Russia, the United Kingdom and the United States, along with the European Union and the Arab League.

In a statement released last Thursday, the ISG said Diab’s government’s “timely and decisive implementation will be essential to stopping and reversing the deepening crises facing the country and its citizens.“

The statement recalled that Lebanon’s economy and its population, “in the absence of reform, remain reliant on external funding and are vulnerable to increased hardships.”

One of the Lebanese protesters told Ya Libnan. ” If Diab is going to take 8 meetings to tell us what his cabinet stands for how long will it take him to do anything for the country .