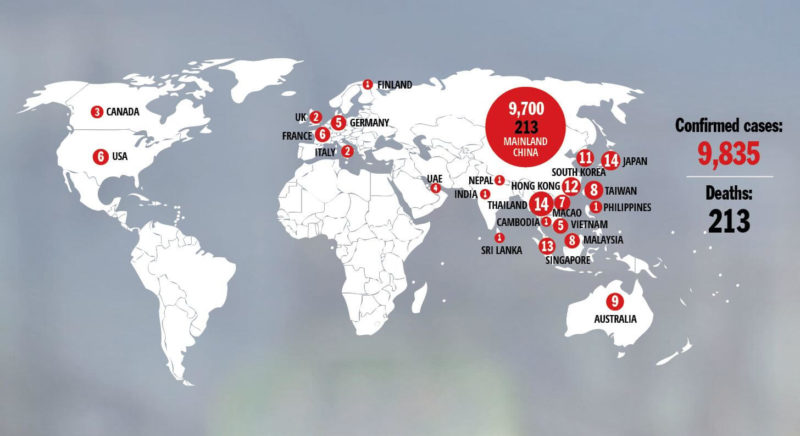 China says it has nearly 10,000 confirmed cases of the novel coronavirus. The virus has caused 213 deaths in China where it emerged late last year.

The World Health Organization says the  worldwide spread of the virus is  a global health emergency, as well as an “extraordinary event” requiring a coordinated international response.

The Trump administration is warning Americans not to travel to China.

The State Department issued what it calls a Level 4-Do Not Travel advisory. It also is recommending all those currently in China to leave.

The Centers for Disease Control and Prevention issued Tuesday a Level 3 notice,  advising Americans to avoid all nonessential travel to China.

Britain reported its first confirmed cases Friday.  “We can confirm that two patients in England, who are members of the same family, have tested positive for coronavirus,” said Chris Whitty, chief medical officer for England.   He said the two are receiving “specialist” care from the country’s National Health Service.

According to a BBC report, the infection is difficult to spot and stop because only an estimated one in five cases will result in “severe symptoms” which means people can spread the infection without having any symptoms or without knowing they have the infection.

Dr. Nancy Messonnier of the Centers for Disease Control said the symptoms of a cold or the flu and the coronavirus are the same, but the risk factors are having visited China’s Hubei province or having close contact with those who have been there.

The virus emerged in Wuhan in Hubei province.  Wuhan is the epicenter of the outbreak and it has been shuttered.  People have been instructed to stay home and public transportation has been shut down.

Mi Feng, China’s National Health commission spokesperson said Friday, “The Chinese government has attached great importance to the epidemic control and we have already adopted the most stringent control measures . . . We hope to cooperate with other countries to safeguard regional and global health and public safety.”

China has today admitted it was too slow to react to the coronavirus outbreak which has sparked a global panic and left at least 213 people dead – amid claims that Beijing could be covering up a higher death toll.

The secretary of the ruling Communist party in Wuhan admitted he felt ‘remorse’ over the outbreak, saying the virus’s impact ‘would have been less’ if measures had been taken sooner.

China has since imposed a drastic quarantine on Wuhan, where the virus is believed to have jumped from wild animals at a city market and infected humans.

William Yang, an East Asia reporter for news site Deutsche Welle, said there were ‘reasons to remain sceptical about what China has been sharing with the world’.

‘While they have been more transparent about certain things related to the virus, they continue to be sketchy and unreliable in other aspects,’ Yang said.

Hong Kong-based news outlet Initium spoke to workers on the mainland who said bodies were being sent for cremation without being properly identified, he said.

‘This means there are patients who died from the virus, but were not added to the official record,’ Yang suggested.

China has taken extreme steps to stop the spread of the virus, including a quarantine of more than 50million people in Wuhan and the surrounding Hubei province.

Few governments could attempt such a feat but the quarantine is made possible by the ruling Communist Party’s extensive controls on society.

Wuhan mayor Zhou Xianwang said today that the task of containing the virus remains ‘severe and complex’ with the number of cases continuing to swell.

City officials have been criticised for withholding information about the infection until the end of last year, despite knowing about the new illness weeks earlier.

‘If strict control measures had been taken earlier, the result would have been better than now,’ he said in an interview with state broadcaster CCTV.

Nonetheless the Chinese ambassador in Geneva today said there was no need for ‘unnecessary panic’ or ‘excessive measures’.

The death toll was hiked on Friday to 213 after 43 new deaths, all but one in Hubei. Most deaths have been elderly people.