Russian strikes kill another 10 civilians in Syria’s Idlib, near a bakery and a clinic 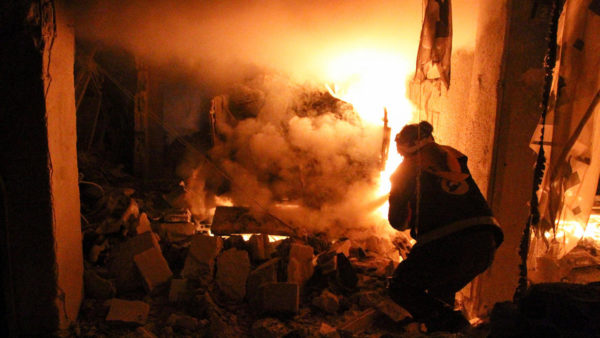 Russian air strikes near a bakery and a medical clinic in Syria’s rebel-held Idlib region killed 10 civilians Thursday as government forces kept up a ground offensive.

The government and its allies have upped their deadly bombardment of the last major rebel bastion, slowly chipping away at it from the south.

Rebel-held territory has shrunk to just over half of Idlib province, along with slivers of neighbouring Aleppo and Latakia, following a series of government gains, the latest of which saw Damascus loyalists retaking the strategic town of Maaret al-Numan on Wednesday.

Early on Thursday, Russian air strikes hit the town of Ariha, between Maaret al-Numan and the city of Idlib to its north, the Syrian Observatory for Human Rights said.

The strikes hit near a bakery and the Al-Shami clinic which is now out of service, AFP correspondents reported.

A dust-covered doctor ran out of the Al-Shami clinic screaming following the attack, which partially damaged the facility’s walls.

Nearby, three entire buildings had collapsed and several vehicles were reduced to mangled wrecks.

The wailing of women and children rang out as rescue workers searched for corpses beneath the rubble.

Toufic Saado, a paramedic, said he was inside the medical facility when three air strikes ravaged the area.

“The wounded were lying on the floor outside the medical centre,” he said.

The latest deaths bring to 21 the number of civilians killed by Russian air strikes in Idlib since Wednesday, the Observatory said.

Earlier this month, Russia denied launching any combat operations in the region since a ceasefire it agreed with rebel supporter Turkey went into effect on January 12.

But the truce has since become a dead letter and the number of reported Russian raids has risen sharply.

Thousands of Russian troops are deployed across Syria in support of the army, while a contingent of Russian private security personnel also operates on the ground.

Moscow’s military intervention in 2015, four years into the Syrian conflict, helped keep President Bashar al-Assad in power and started a long, bloody reconquest of territory lost to rebels in the early stages of the war.

Russian-backed regime forces on Thursday pushed north of the highway town of Maarat al-Numan, their latest conquest, said the Observatory.

They are now moving towards the town of Saraqib, whose residents have mostly fled in recent days in the face of heavy bombardment, the war monitor added.

Fighting is now within five kilometres (three miles) of the town, said the Observatory.

Both Maarat al-Numan and Saraqib lie on the key M5 highway connecting the capital Damascus to second city Aleppo.

The road has been in the sights of the government for some time as it seeks to revive a moribund economy ravaged by almost nine years of war.

Some 50 kilometres (30 miles) of the M5 remain outside regime control, the Britain-based Observatory said.

Tens of thousands of civilians have fled the government’s advance, seeking safety closer to the Turkish border further north.

The violence in the northwest has displaced more than 388,000 civilians since December, the United Nations says.

At least 20,000 of them have moved in the past two days, UN undersecretary general for humanitarian affairs Mark Lowcock said on Wednesday.

“Unless the current hostilities stop, we will see an even greater humanitarian catastrophe,” he told the UN Security Council.

Aid groups have warned the latest violence is compounding one of the worst humanitarian disasters of the nine-year war.

Government forces, which now control around 70 percent of Syria, have repeatedly vowed to retake the entire country, including Idlib.

The civil war has killed more than 380,000 people and displaced more than half the country’s population since it erupted following the brutal repression of anti-government protests in 2011.

Several UN-backed rounds of peace talks have failed to stem the bloodshed and a parallel track led by regime backer Russia and rebel ally Turkey has gained precedence in recent years.

On Dec 24 , 2019 at least eight people, including five children, were killed in Russian airstrikes on a school in northwest Syria sheltering displaced civilians, according a war monitors.