Lebanon’s ‘week of rage’ spills onto Beirut streets: In pictures 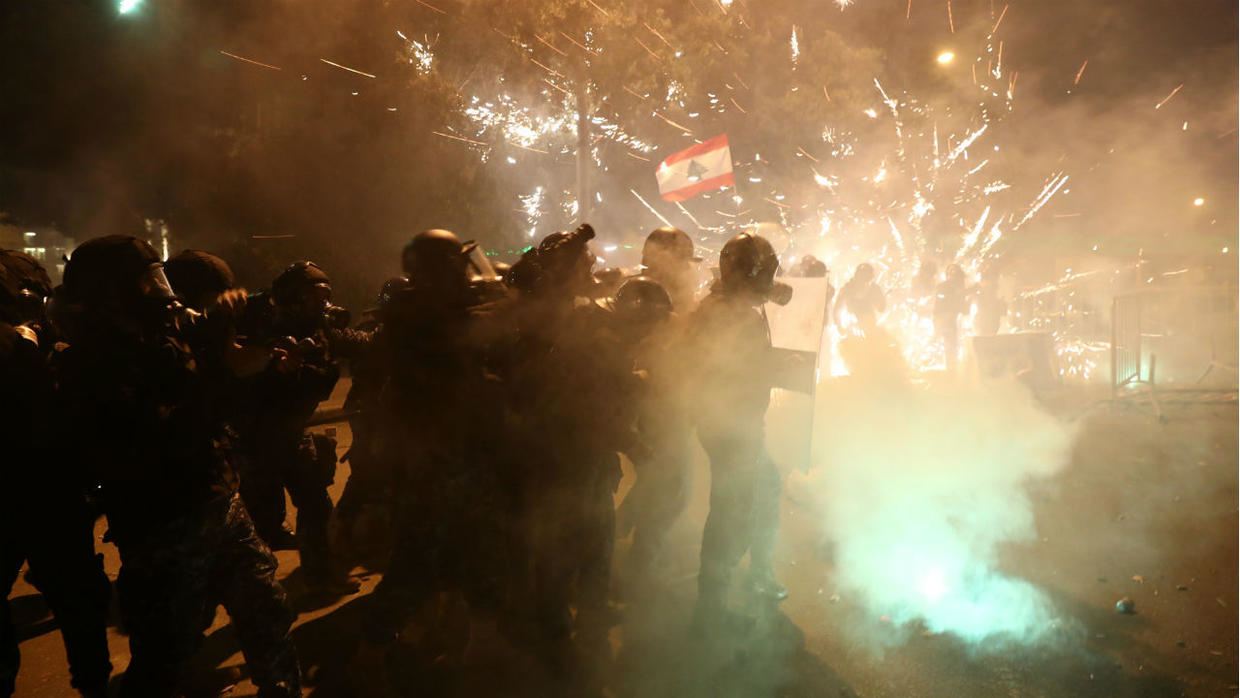 After three months of largely peaceful protests across Lebanon, violence erupted this weekend as demonstrators, frustrated with the deteriorating economic crisis and political deadlock, clashed with riot police in the capital, Beirut on Saturday. Lebanon’s ‘week of rage’ has witnessed an outpouring of wrath on the streets that threatens to spiral unless protesters demands are met.

When protesters across sectarian, geographic and class divides took to the streets of Lebanon in mid-October calling for change, the public display of unity and bonhomie captured the nation.

Demonstrators initially took to the streets to protest the government’s planned tax on WhatsApp and other messaging applications, but they gradually expanded to protests calling for “the fall of the regime”.

The images emerging from the streets of the capital, Beirut, as well as northern cities such as Tripoli and Nabatiyeh in the south, defied the news stereotypes of Arab security officials violently cracking down on protesters.

One image and video clip in particular summed up the mood of the nation and promptly went viral.

On October 23, Lebanese army soldiers tried to open up arterial roads connecting to national highways that protesters had blocked. The setting was ripe for a standoff. Both sides knew that and were determined to avoid it. “Peaceful! Peaceful!” the demonstrators chanted, some offering roses to the soldiers.

In the thick of the protest, a soldier was caught on camera moved to tears, sobbing as the line-up of troops faced protesters. As the demonstrators waved Lebanese flags and broke out into the national anthem, Koulouna lil watan – “All of us for the nation” – a few protesters hugged the emotional young soldier, some sympathetically patting his cheeks.

Within hours, the clip went viral, with social media users noting that the soldiers were also Lebanese, sharing the same dreams of their fellow citizens.

Barely three months later, the scenes on the streets of Beirut were starkly different this weekend. Almost 400 people were wounded Saturday in running battles between protesters and security forces in the capital.

Clashes began after dozens of protesters, some concealing their faces with scarves, threw rocks and other objects at anti-riot police guarding the road leading to parliament.

Security forces responded with volleys of tear gas and rubber bullets to disperse the crowds.

Reporting from Beirut, FRANCE 24’s Leila Molana-Allen said Saturday’s violence was unlike anything Lebanon had witnessed since protests erupted in October.

The demonstrations started fairly peacefully on Saturday afternoon, explained Molana-Allen. “Then a group of protesters decided they wanted to get into Parliament Square, which has been blocked off by riot police. When that happened, almost immediately riot police responded by firing water cannons at them. That’s been quite rare in these protests. That angered protesters who say parliament belongs to us.”

After 5.30 pm local time, the violence escalated and riot police began using tear gas, according to Molana-Allen. “One of the things that’s been happening is that riot police are not using the tear gas correctly. There are many images of them actually shooting tear gas canisters directly at protesters. Now that is illegal under international law, if that can be proven — human rights watchers are looking into it,” she explained.

On Sunday, Human Rights Watch described the security force response as “brutal” and called for an urgent end to a “culture of impunity” for police abuse.

“There was no justification for the brutal use of force unleashed by Lebanon’s riot police against largely peaceful demonstrators in downtown Beirut,” said Michael Page, deputy Middle East director at HRW. “Riot police showed a blatant disregard for their human rights obligations, instead launching teargas canisters at protesters’ heads, firing rubber bullets in their eyes and attacking people at hospitals and a mosque.”

Dozens of protesters were arrested as the Beirut night sky lit up with fireworks set off before riot police lines and thick clouds of smoke engulfed parts of the city.

Frustrated by a deepening economic crisis while efforts remained deadlocked to form a new government to replace the one that had stepped in, protesters on Tuesday launched a “week of anger”.

The scenes from Beirut have since changed, with images of protesters smashing bank windows, expressing their fury over the deteriorating economic situation. The Lebanese pound has lost nearly half its value since protests began, dollar shortages have driven up prices and confidence in the banks has collapsed.

On October 29, Saad Hariri announced his resignation as prime minister. More than a month later, on December 19, Lebanon’s political factions finally agreed on the appointment of former education minister Hassan Diab as the new premier.

Diab has promised to form a technocratic government of “experts,” in keeping with the demands of Lebanese citizens weary of the country’s archaic confessional system that has seen political factions negotiate to keep a grip on power while failing to deliver basic services.

But Diab’s attempts to form a government of independent experts have faced pushback from Lebanon’s powerful sectarian groups particularly the Amal Movement, Hezbollah and the Free Patriotic Party founded by President Michel Aoun.

Lebanon has been without a government since October 29, prompting Hariri on Sunday to issue a call for politicians to urgently form a new government.

“There is a roadmap to calm the popular storm. Stop wasting time, form a government, open the door to political and economic solutions,” tweeted Hariri.

Three months after protests erupted across the country, a prime minister and his cabinet may have fallen in Lebanon, but the system of patronage and privileges entrenched in a sectarian system has proved much more difficult to dislodge.
(FRANCE 24)