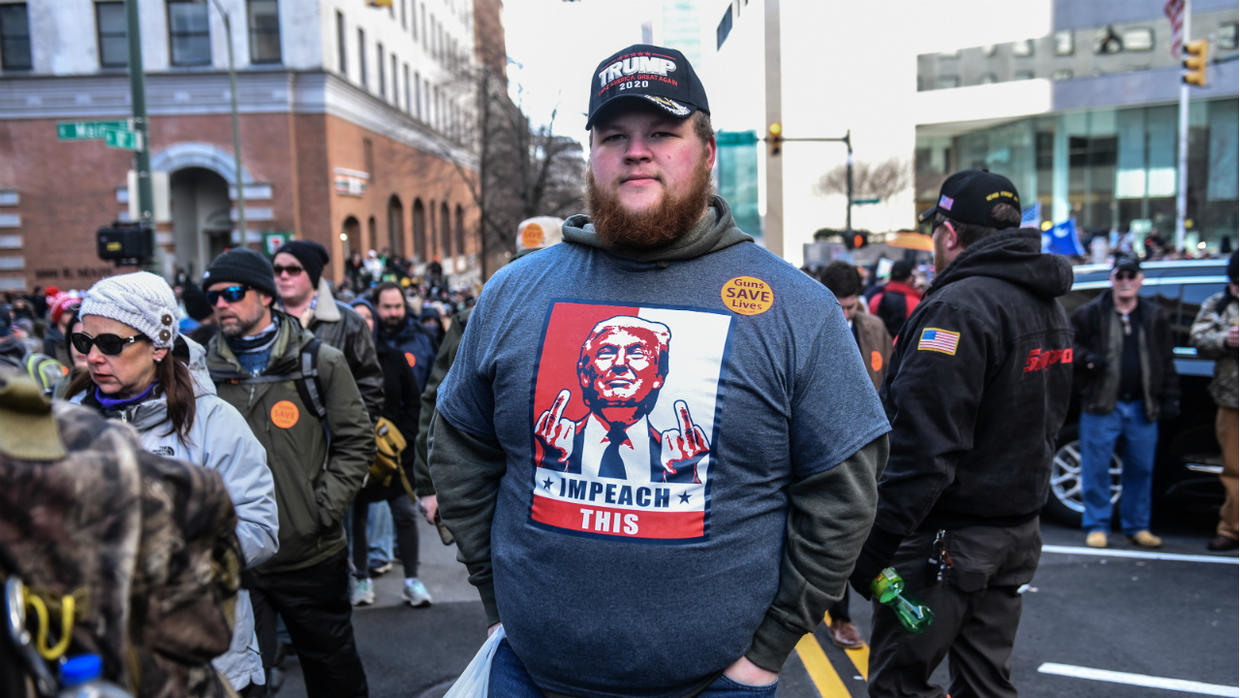 The rally took place without incident under a state of emergency declared by the governor over fears of violence by far-right groups.

Dressed in hunting jackets and caps, rally-goers were checked for weapons as they passed through tight security before entering a fenced off area of Richmond’s Capitol Square for the so-called “Lobby Day” event.

Many more gathered in the streets surrounding the Capitol building, some bearing sidearms or long guns, which was permitted outside the designated rally area.

They carried US and Virginia state flags and a huge banner emblazoned with the image of an assault rifle and the legend: “Come and Take It.”

Brooks, a 24-year-old Richmond resident who would not give his full name, came with a group of friends, including one with an AR-15 assault rifle, “to support the Second Amendment.”

“It’s our constitutional God-given right to arm ourselves. Having a gun is for peace of mind. It’s a protection thing,” he told AFP.

The rally was organized by the Virginia Citizens Defense League (VCDL), which opposes gun control laws proposed by state Democrats who control the Virginia government.

The VCDL has condemned what it considers a breach of the Second Amendment of the US Constitution, which states that “the right of the people to keep and bear Arms, shall not be infringed.” The amendment has proved controversial over the years and has been subject to many different interpretations.

The Supreme Court has ruled that individuals have the right to keep firearms in their households, but left it to states to determine how the weapons could be transported.

President Donald Trump, a major ally of the pro-gun lobby, sent words of encouragement to the protesters via Twitter on Monday.

“The Democrat Party in the Great Commonwealth of Virginia are working hard to take away your 2nd Amendment rights,” he said. “This is just the beginning. Don’t let it happen, VOTE REPUBLICAN in 2020!”

Many of those massing near Capitol Square wore “Trump 2020” or “Make America Great Again” hats in support of the conservative president. Some chanted “four more years” or “USA, USA.”

Richmond was a capital of the pro-slavery Confederacy, and Virginia has traditionally leaned conservative.

But the state, which borders the capital Washington, flipped in November and passed into Democratic hands. State Democrats promised to tackle what they considered the laxity surrounding firearms carrying laws, particularly after a May 2019 shooting in Virginia Beach that left 12 dead.

The new laws under consideration would prohibit magazines with more than 10 rounds, the purchase of more than one weapon per month, and permit judges to seize weapons from individuals deemed dangerous.

A backlash to the restrictions has spread throughout the state, and more than 100 counties and localities have declared themselves Second Amendment sanctuaries, threatening not to apply the new laws.

Justin Dorton, a 38 year old from North Carolina who was dressed in military camo attire, showed off an AR-15 rifle and said, “there should be nothing wrong with this. Nothing to be scared of. It’s just a tool.”

“This is just exercising my rights,” he told AFP.

“Everybody in the crowd is armed and no crime is being committed. Gun laws are not going to affect criminals.”

At the end of last week, the FBI arrested seven alleged members of the white extremist group “The Base” suspected of trying to create trouble at the rally.

Democratic Governor Ralph Northam on Wednesday declared a state of emergency for the rally site, which has been in effect since Friday and will continue through Tuesday evening.

Carrying firearms, normally allowed in the streets, is prohibited, as are dangerous objects such as baseball bats and chains.

“The VCDL (organisers) have intended this to be a peaceful event, but they have unleashed something much larger that they might not be able to control,” Northam said.

The governor said they have seen “credible and serious threats” of “violence, armed confrontation and assault on our Capitol (from) groups with action plans.”

The groups include out-of-state militias and hate groups, he said.

“No one wants to see an incident like the one we saw in Charlottesville,” Northam said, referring to another Virginia city where clashes between white supremacists and anti-racist demonstrators in August 2017 resulted in one dead and dozens wounded.