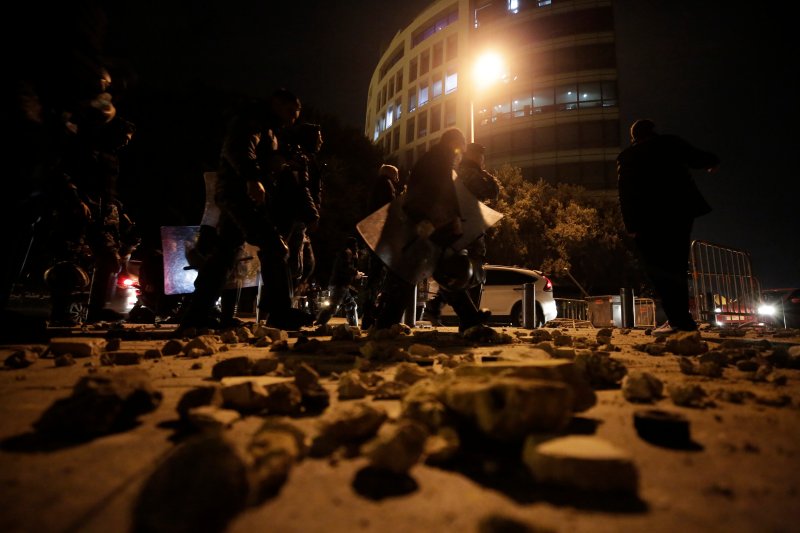 Lebanese police walk after dispersing a protest in Beirut, Lebanon, Saturday, Jan. 18, 2020. Police fired volleys of tear gas and rubber bullets in Lebanon’s capital Saturday to disperse thousands of protesters amid some of the worst rioting since demonstrations against the country’s ruling elite erupted three months ago. (AP Photo/Hassan Ammar)
Share:

BEIRUT, LEBANON- Security forces fired tear gas, water cannons and rubber bullets in clashes Sunday with hundreds of anti-government protesters outside Lebanon’s Parliament, as violence continued to escalate in a week of rioting.

At least 114 people were injured in the protests, according to the Red Cross and the Lebanese Civil Defense teams, with 47 taken to hospitals for treatment. Most of the wounds were from rubber bullets, some in the face and upper body, reporters said.

Demonstrators threw rocks and other projectiles and even shot a stream of fire from ignited aerosol cans. Security forces responded with tear gas and water cannons before turning to rubber bullets to try to disperse the crowds. A few protesters tried to climb metal barriers separating them from the riot police. Hundreds more, some chanting “Revolution,” gathered farther down the blocked street that leads to the Parliament in central Beirut.

Army troops were deployed to the area briefly, and the violence stopped as protesters cheered the troops. But the army pulled out minutes later, and the clashes resumed with security forces barricaded behind the barriers.

Security forces reinforced the metal barriers surrounding the Parliament building earlier in the day, after the worst night of violence since the unrest erupted several months ago.

There were nine hours of street battles with security forces Saturday as some protesters tried to scale the barriers. Those clashes left at least 377 people injured, the Red Cross and the Lebanese Civil Defense said. More than 120 were treated in hospitals, including a protester with an eye injury, as well as members of the security forces. Lebanon’s Internal Security Forces said 142 of its members were injured, including seven officers, some with serious concussions.

Lawyers defending protesters said 43 were arrested Saturday, including two minors. They said 11 were released the same day, and the other 32 were released Sunday, pending investigation. Most of the detainees were beaten while in custody, the lawyers added.

The military made a show of force Sunday, with large numbers deployed in downtown Beirut and in southern Lebanon, patrolling ahead of the rallies. Riot police were in the front line guarding the Parliament.

The clashes took place amid a rapidly worsening financial crisis and an ongoing impasse over the formation of a new government. Prime Minister Saad Hariri and the rest of the government resigned in late October. Prime Minister-designate Hassan Diab had been expected to announce a new 18-member Cabinet on Sunday after meeting with President Michel Aoun, but there was no announcement after a 90-minute meeting, signaling another delay among the fractious political leaders.

The protests, which began in October, took a violent turn last week as popular frustration began to rise. Demonstrators say the political elite has ignored their calls for forming an independent government to tackle the deepening crisis.

“We don’t accept the government the way they are forming it. They are using the old method to form the government … so it’s not acceptable,” said protester Jil Samaha. “We want a different way of forming a government.”