Cabinet formation delayed over hurdles. Will Diab bow out? 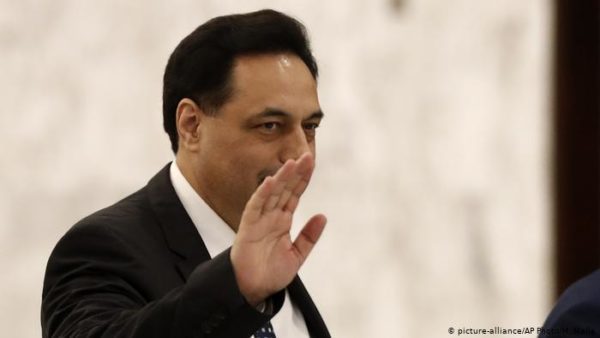 BEIRUT: The formation of a new government has been put off until after the New Year as Prime Minister-designate Hassan Diab struggles to resolve remaining hurdles, mainly over the representation of the Sunni sect and four major parties that have vowed not to take part, political sources said Sunday. Both President Michel Aoun and Diab had hoped that an 18-member government of specialists could be formed as a “gift” to the Lebanese ahead of the New Year.

Having met last week with senior officials from the Free Patriotic Movement, the Amal Movement, Hezbollah and their allies to discuss their participation in the next government, Diab will seek to contact other parties that have announced they will not participate to talk them into joining, a political source familiar with the Cabinet formation process told The Daily Star.

The source said Diab, who was designated by Aoun on Dec. 19 to form a new government after caretaker Prime Minister Saad Hariri bowed out of the premiership race, was striving to avoid a “one-sided” or “confrontational” government that would have adverse effects on Lebanon’s attempts to attract badly-needed foreign aid.

In a rebuff to his designation, Hariri’s Future Movement, along with the Lebanese Forces and the Kataeb Party, have told Diab they would not participate in the government. The Progressive Socialist Party’s parliamentary bloc, which boycotted the consultations with Diab to form the new Cabinet, also said it would not take part.

Hariri left Beirut for Paris Sunday to spend a vacation with his family lasting several days, a statement from his media office said.

After gaining the support for a government made up of “specialists” from the FPM, Amal and Hezbollah, all of which had demanded a techno-political Cabinet embracing all the parties, Diab is facing difficulties in the representation of the Sunni sect as some Sunni candidates have turned down his offer to join the next government.

Also, the lack of public support from Dar al-Fatwa, the country’s highest Sunni religious authority, for Diab’s designation is depriving the premier-designate of an important cover from his own community. The absence of the four parties is bound to characterize Diab’s government as “one-sided” or “confrontational,” a possibility that might raise concerns of the international community which had made financial aid to the protest-hit, cash-strapped country conditional on the formation of an “effective and credible” government committed to carrying out key reforms to shore up the flagging economy.

Diab, a university professor and former education minister, was reported to have contacted PSP officials to discuss names of Druze ministers in the new government.

During the phone conversation, Geagea restated the LF’s position that calls for the formation of a government of “independent specialists.”

“The Lebanese Forces does not want to be represented [in the government] and will watch the formation and performance,” Geagea told Diab, according to Bou Assi.

Speaking to the Voice of Lebanon radio station Sunday, LF lawmaker George Okais said: “The Lebanese Forces will support Dr. Hassan Diab if he succeeded in forming a government of honest and clean-handed specialists.”

Okais warned that if Diab formed a government that did not appease the protesters and failed to gain the satisfaction of the international community, “he would be contributing toward accelerating the [economic] collapse and taking the country to the unknown.”

Diab had previously pledged to form a small government made up of “independent specialists” who do not belong to political parties – a major demand of hundreds of thousands of protesters who have taken to the streets since Oct. 17, calling for a change of the decades-old confessional ruling system and the removal of the entire political class they deem corrupt and incompetent.

The French Foreign Ministry said Friday the International Support Group for Lebanon was ready to extend financial support for the country once a new “effective and credible” government was formed to enact reforms to rescue the economy. The ISGL brings together the United Nations, the governments of China, France, Germany, Italy, Russia, the United Kingdom and the United States, along with the European Union and the Arab League. One of the world’s most heavily indebted countries, Lebanon is grappling with its worst economic and financial crisis since the end of the 1975-90 Civil War.

Hezbollah, which along with the Amal Movement and the FPM, had endorsed Diab’s designation, warned that the failure to form a new government would plunge the country into chaos.

“Some want to involve the resistance [Hezbollah] in something it does not want. The resistance wants to play a positive role so that the country’s roof will not fall on everyone,” MP Mohammad Raad, head of Hezbollah’s parliamentary Loyalty to the Resistance bloc, said at a memorial ceremony in the southern village of Yohmor.

“Anyone who is worried, he must worry about the failure to form the government because this matter will lead to chaos. When the country falls into chaos, it will be ruled by the strong,” he added, without elaborating.

In his Sunday’s sermon in Bkirki, Maronite Patriarch Beshara Rai called for fulfilling the protesters’ demand for the formation of “a government independent from political parties that brings together a homogenous team of competent and honest specialists to draw up a rescue plan and implement it under Parliament’s supervision.”

As Lebanon entered the 74th day of unprecedented popular uprising against the ruling political elite, tens of people rallied near Diab’s residence in Beirut’s Talet al-Khayat area Sunday in the latest of protests against his designation, calling on him to step down.

“We refuse that Hassan Diab form a new government because the corrupt political class has nominated him,” an angry protester told a local TV station. “The rebels did not nominate Hassan Diab. Therefore, we cannot accept him as prime minister.”

Many protesters have questioned Diab’s fitness for office since his designation. Protesters also gathered outside caretaker Telecommunications Minister Mohamed Choucair’s home in Hamra, denouncing the renewal of operating contracts for the two state-run mobile companies Alfa and touch. They made claims of corruption in the telecoms sector and the ministry itself.

Around a hundred protesters gathered outside Diab’s residence Saturday, calling for him to step down. Many of the demonstrators had made the journey from Tripoli by bus to demand Diab’s resignation. Security forces blocked all roads leading to Diab’s home with metal barricades, the state-run National News Agency reported.