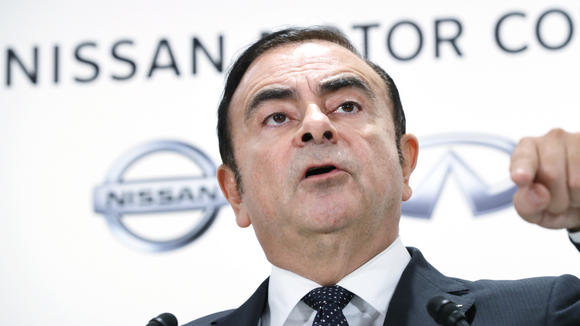 Ghosn has been put on trial in Japan on charges of embezzling funds from the Renault-Nissan group and was released on bail in April.

Ghosn spoke to his wife for the first time in eight months in November, after a Tokyo court lifted a ban on contact between the pair.

Ghosn is on bail as he awaits trial on four charges of financial misconduct related to his time as chairman of the Japanese car giant he is widely credited with saving from the brink of bankruptcy.

In August his wife, Carole Ghosn, appealed to French President Emmanuel Macron to intercede on behalf of her husband with Japanese leader Shinzo Abe at the 45th G7 summit that was held in the French town of Biarritz.

The 65-year-old tycoon spent 130 days in detention before winning bail ahead of a trial likely to take place in 2020.

He strenuously denies all the charges against him and is seeking to have the case thrown out, arguing the prosecutors and Nissan investigators have acted illegally during the probe into his alleged misconduct.

The circumstances of his return to Lebanon are not clear yet according to media reports.

The lawyers of former Nissan Chairman Carlos Ghosn said last October they have requested that financial misconduct charges against him be dismissed.

They said in a statement that they filed papers in Tokyo District Court alleging prosecutorial misconduct that would prevent Ghosn from having a fair trial.

The filings say the case results from unlawful collusion between prosecutors, government officials and Nissan executives to drum up allegations.

The papers Ghosn’s lawyers filed in Tokyo District Court in October allege collusion between the prosecutors, government officials and executives at Nissan Motor Co. to drum up criminal allegations in order to remove him as chairman.

Ghosn  maintained he is innocent ever since he was arrested in November 2018 . The prosecutors say they are confident they have a case.

It was unclear how Ghosn would have been able to leave Japan, where he has been under strict court-imposed restrictions on his movements.

3 days ago Nissan Motor told its managers to cut back on nonessential spending and to “conserve every yen” to counter declining car sales and slumping profits, Reuters report ed on Dec 27 citing three sources with knowledge of the matter.

The cost-containment measures will stay in place for the fiscal year ending March 31, 2020 and are likely to continue into the next business year, they said.

Although the company isn’t facing a cash crunch, its business outlook has worsened more than expected even after starting a turnaround plan in April to boost sales and profits.

The moves come about a year after Carlos Ghosn was ousted as its chief amid scandal and follows the departure of other top executives.

Updates: According to Lebanese website el Neshra, Ghosn was smuggled out of Japan in a wooden crate by a western security company . He was then transferred to a private plane which took him to Lebanon via Turkey

The Ghosn case focused international attention on Japan’s criminal justice system and the use of so-called hostage justice. Critics say the system enables authorities to hold alleged offenders in difficult conditions for long periods of time in the hope of inducing an admission of guilt.

After his first arrest, Ghosn was repeatedly denied bail and, as is traditional in Japan, was not permitted to be accompanied by a lawyer while being interrogated.

The practice of prolonging an alleged offender’s detention by incrementally adding charges has also been criticized overseas for enabling suspects to be denied the chance to file for bail. Ghosn was released on bail in early March after more than 100 days in detention.

According to analysts familiar with the Japanese Hostage justice system, Ghosn must have given up on getting a fair trial since the prosecutors in Japan will not give up until they get an admission of guilt .

There are numerous examples of people spending years in prison for crimes they didn’t commit or where serious doubts have emerged because of apparently “unsafe” confessions.

Tomohiro Ishikawa a former Japanese MP who faced similar problems with the Japanese Justice system told BBC last February :”Japanese prosecutors are very persistent. “They write the plot out before they make the arrest.”

He is of the opinion that Ghosn’s real crime, in the eyes of Japan’s prosecutorial elite, is greed. He was the first CEO in Japan to earn millions of dollars a year, and that changed Japanese corporate culture.

The following conditions were imposed on Ghosn as part of the bail, according to a member of his legal team earlier this year.

— Must reside in Tokyo.

— Cannot travel abroad; must surrender passport to his lawyer.

— Needs court permission to go on a trip of more than two nights.

— Must install surveillance cameras at the entrances of his residence.

— Prohibited from accessing the internet and using e-mail.

— Can only use a personal computer at his lawyer’s office that is not connected to the internet.

— Banned from communicating with parties involved in the case.

— Needs court’s permission to attend a Nissan board meeting.