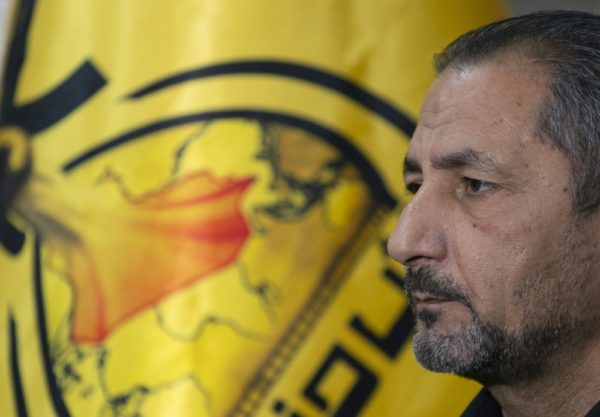 Mohammed Mohieh, the spokesman of Iraq’s Iranian-backed Kataeb Hezbollah, or Hezbollah Brigades, gives an interview at his office, in Baghdad, Iraq, Monday, Dec. 30, 2019. Mohieh said Monday that the death toll from U.S. military strikes in Iraq and Syria against its fighters has risen to 25, vowing to exact revenge for the “aggression of evil American ravens.” (AP Photo/Nasser Nasser)
Share:

BAGHDAD — An Iranian-backed Iraqi militia vowed Monday to retaliate for U.S. military strikes in Iraq and Syria that killed 25 of its fighters and wounded dozens, raising concerns of new attacks that could threaten American interests in the region.

The U.S. attack — the largest targeting an Iraqi state-sanctioned militia in recent years — and the calls for retaliation, represent a new escalation in the proxy war between the U.S. and Iran playing out in the Middle East.

The Iraqi government said it will reconsider its relationship with the U.S.-led coalition — the first time it has said it will do so since an agreement was struck to keep some U.S. troops in the country. It called the attack a “flagrant violation” of its sovereignty.

The U.S. military carried out the strikes Sunday against the Iranian-backed Kataeb Hezbollah militia, calling it retaliation for last week’s killing of an American contractor in a rocket attack on an Iraqi military base that it blamed on the group.

Secretary of State Mike Pompeo said the strikes send the message that the U.S. will not tolerate actions by Iran that jeopardize American lives.

In a partly televised meeting Monday, Iraqi Prime Minister Adel Abdul-Mahdi told Cabinet members that he had tried to stop the U.S. operation “but there was insistence” from American officials.

The U.S. Defense Secretary Mark Esper called the Iraqi leader about a half-hour before the strikes to tell him of U.S. intentions to hit bases of the Kataeb Hezbollah militia, Abdul-Mahdi’s office said in a statement Sunday night, adding that the premier urged him to call off the plan.

The U.S. military said “precision defensive strikes” were conducted against five sites of Kataeb Hezbollah, or Hezbollah Brigades in Iraq and Syria. The group, which is a separate force from the Lebanese militant group Hezbollah, operates under the umbrella of the state-sanctioned militias known collectively as the Popular Mobilization Forces. Many of them are supported by Iran.

“Our battle with America and its mercenaries is now open to all possibilities,” Kataeb Hezbollah said in a statement around midnight Sunday. “We have no alternative today other than confrontation and there is nothing that will prevent us from responding to this crime.”

The Iraqi government condemned the U.S. attack, calling it a “dangerous violation of the rules of engagement that govern the work of U.S.-led coalition forces in Iraq” by taking unilateral military action without the approval of Iraqi authorities.

In a strongly-worded statement, it said the attack targeted Iraqi forces operating in an area on the front lines of the war against the Islamic State group, and fighters who played an instrumental role in defeating the extremists in eastern Syria and western Iraq.

The Iraqi statement said the U.S. attack violated the “goals and principles” of the international coalition fighting IS. Iraq would “review its relationship” with the U.S.-led forces in the country, in order to better preserve “the sovereignty and security of the country,” it added.

Iraq’s top Shiite cleric called on the Iraqi government to step in and prevent the country from turning into “an arena for settling accounts” between regional and international powers.

In a statement, Grand Ayatollah Ali al-Sistani condemned the “atrocious aggression” by the U.S. and called for the respect of Iraq’s sovereignty and to abstain from violating it “under the pretext of responding to some illegal practices by some sides.”

Al-Sistani, however, added that “only Iraqi authorities are entitled to deal with these practices and take necessary measures to prevent them.”

The cleric’s comments appeared to be a warning against any retaliation by Iran-backed paramilitary groups which would further inflame the situation in the country. Iraq has been roiled by three months of mass protests against the ruling elite as well as the influence of Iran-backed militias in the country’s politics.

About 500 people have died in anti-government protests, most of them demonstrators killed by Iraqi security forces. The uprising prompted the resignation last month of Abdul-Mahdi, who remains in a caretaker capacity.

The U.S. blames the Kataeb Hezbollah militia for a rocket barrage Friday that killed a U.S. defense contractor at a military compound near Kirkuk, in northern Iraq, as well as for a series of other attacks on bases that house American troops in Iraq that have not been claimed by any faction.

A spokesman for Kataeb Hezbollah denied that the group was behind the rocket attacks on U.S. bases, including the one that killed the American contractor, saying Washington is using them as a pretext to attack his group.

The spokesman, Mohammed Mohieh, told The Associated Press the death toll from the American airstrikes rose to 25 on Monday and that at least 51 militiamen were wounded, some of whom were in serious condition. The militia would retaliate, he said, but added that the group’s commanders would decide on the form of retaliation.

“These forces must leave,” he said of U.S. troops in Iraq, calling the latest attack a “crime” and a “massacre.”

The U.S. has maintained some 5,000 troops in Iraq at the invitation of the Iraqi government, to help assist in the fight against the Islamic State group.

An official with the Popular Mobilization Forces said one of the American missiles struck a room where the fighters were taking a nap in the afternoon, killing some of them in their sleep as the ceiling collapsed. The official, who spoke on condition of anonymity because he was not authorized to talk to reporters, said U.S. forces have targeted Kataeb Hezbollah in the past but offered no evidence to support his claims.