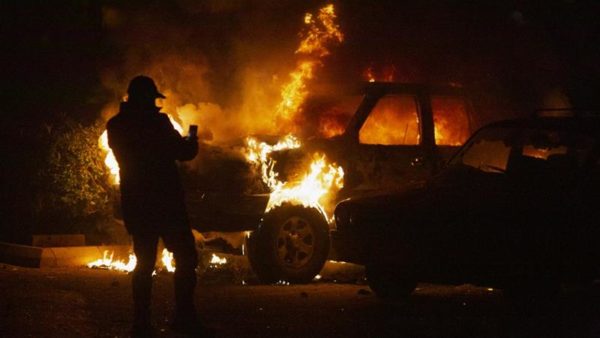 Lebanese troops lobbed tear gas to disperse supporters of Hezbollah and Amal who tried to storm a square in Beirut in response to a video that purportedly offended Shia followers.

The video, which inflamed passions in a country where sectarian divisions run deep, was purportedly made by an expatriate Lebanese Sunni from the northern city of Tripoli and released on social media.

It reportedly insulted Shia religious figures in the country.

According to the civil defence agency more than 60 people were injured in the clashes.

Ignoring calls for restraint by politicians, the youths tried to break a security cordon to storm the square where anti-government demonstrators have set up tents as part of a protest that has been going on for weeks.

In the vicinity of the area close to the main road that links the capital’s eastern and western sections, many of young people lit tyres on fire, smashed office buildings, and torched several cars, live coverage by local television stations showed.

The protesters camped in the square have been singled out by Shia groups in the past angered by chants against their political leaders, although Tuesday’s violence was of an overtly sectarian nature.

In the predominately Sunni populated city of Saida in southern Lebanon, groups of masked youths stormed into the main square where they set ablaze several tents set up by demonstrators who have camped for weeks, local TV reported.

Lebanon has been gripped by a historic wave of protests since October 17 leading to the resignation of Saad Hariri as prime minister, amid anger at the government’s failure to address the country’s worst economic crisis since the 1975-1990 civil war.

More than seven weeks since Hariri quit, politicians have been unable to agree on a new administration despite the deepening financial crisis.

Protesters have called for a government of technocrats, rather than politicians from the ruling class, to help revive the country’s battered economy.

The impasse took a violent turn at the weekend when Beirut was clouded in tear gas as security forces clashed with protesters who blame the ruling elite for corruption and bad governance. Dozens were wounded.

The nomination of Lebanon’s next prime minister was postponed after important Christian parties said they would not support the candidacy of Hariri, presenting a new problem for the country and its flailing economy.

Hariri resigned on October 29 amid widespread protests against Lebanon‘s ruling elite but had seemed set to return on Monday after all other candidates failed to secure enough support from the country’s Sunni Muslim establishment.