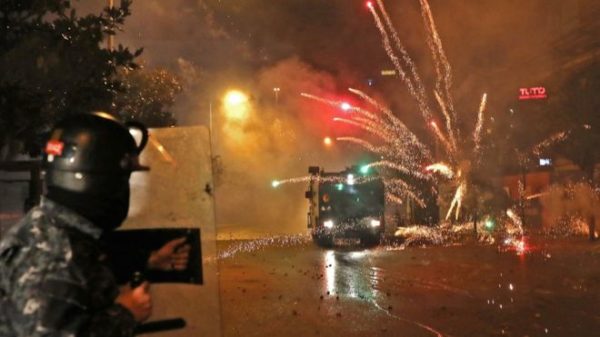 The youths, reportedly supporters of the Hezbollah and Amal movements, set cars ablaze and threw stones and fireworks at police, who used tear gas and water cannon to disperse them.

It was the third consecutive night of violence in Beirut.

Anti-government demonstrators clashed with police on Saturday and Sunday.

Dozens of people have been injured in some of the worst violence seen since protests demanding a complete overhaul of the political system began in October.

The UN envoy to Lebanon called on Monday for an investigation into the alleged use of excessive force by security personnel and warned that further postponing a political solution to the crisis would “create a fertile ground for provocations”.

The latest violence came hours after President Michel Aoun delayed until Thursday formal consultations with parliamentary blocs on who to name as prime minister.

Saad Hariri resigned seven weeks ago in response to the protests, but talks on a replacement have been deadlocked.

Mr Hariri, who is considered the only candidate despite ruling himself out last month, requested the postponement to avoid “a nomination without any major Christian bloc taking part”, his office said.

The Maronite Christian Lebanese Forces (LF) party has reportedly said it will refuse to nominate Mr Hariri or anyone else for the premiership, which must go to a Sunni Muslim under Lebanon’s complex confessional power-sharing system.

Other Christian groups have objected to Mr Hariri’s plan to appoint a cabinet of technocrats. Mr Aoun’s Free Patriotic Movement (FPM) has insisted that the cabinet must include politicians, as does its ally Hezbollah.

Anti-government protesters meanwhile say they reject Mr Hariri’s reappointment because he is part of the ruling elite that has failed to deal with an ailing economy, rising prices, high unemployment, poor public services and widespread corruption. They want an independent, non-sectarian government to be formed.

As well as clashing with police officers, the Shia youths who took to the streets in Beirut on Monday night attempted to break through a security cordon around a square where anti-government protesters are camped.

Supporters of Hezbollah and Amal also attacked and set fire to protests camps elsewhere in Lebanon, including Sidon and Nabatiyeh.

The youths in Beirut were infuriated by a video circulated online that is said to show a man insulting members of the family of the Prophet Muhammad revered by Shia.

LBC TV said the police’s central criminal investigations department was looking into the video and planned to summon the man who appears in it for questioning.

Senior Shia cleric Sayyid Ali Fadlallah called for calm on Twitter, saying that the best way to express love for the prophet’s family would be to reject sedition.