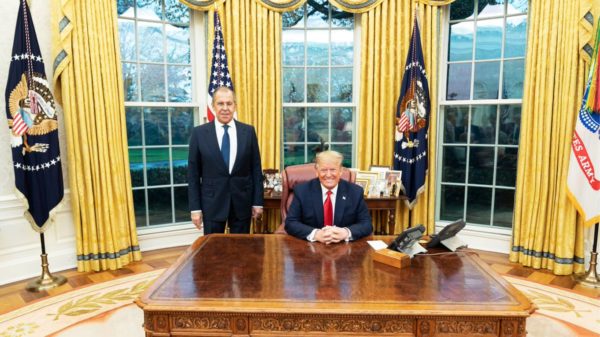 Sometimes a picture doesn’t have to be worth a thousand words. Just a few will do. As Russian Foreign Minister Sergey Lavrov returned home from his visit with President Donald Trump in the Oval Office last week, Russian state media was gloating over the spectacle. TV channel Rossiya 1 aired a segment entitled “Puppet Master and ‘Agent’—How to Understand Lavrov’s Meeting With Trump.”

Vesti Nedeli, a Sunday news show on the same network, pointed out that it was Trump, personally, who asked Lavrov to pose standing near as Trump sat at his desk. It’s almost the literal image of a power behind the throne.

And in the meantime, much to Russia’s satisfaction, Ukrainian President Volodymyr Zelensky is still waiting for that critical White House meeting with the American president: the famous “quid pro quo” for Zelensky announcing an investigation that would smear Democratic challenger Joe Biden. As yet, Zelensky hasn’t done that, and as yet, no meeting has been set.

Russian state television still views the impending impeachment as a bump in the road that won’t lead to Trump’s removal from office. But President Vladimir Putin’s propaganda brigades enjoy watching the heightened divisions in the United States, and how it hurts relations between the U.S. and Ukraine.

They’ve also added a cynical new a narrative filled with half-joking ironies as they look at the American president’s bleak prospects when he does leave office.

Appearing on Sunday Evening With Vladimir Soloviev, Mikhail Gusman, first deputy director general of ITAR-TASS, Russia’s oldest and largest news agency, predicted: “Sooner or later, the Democrats will come back into power. The next term or the term after that, it doesn’t matter… I have an even more unpleasant forecast for Trump. After the White House, he will face a very unhappy period.”

The host, Vladimir Soloviev, smugly asked: “Should we get another apartment in Rostov ready?” Soloviev’s allusion was to the situation of Viktor Yanukovych, former president of Ukraine, who was forced to flee to Russia in 2014 and settled in the city of Rostov-on-Don.

Such parallels between Yanukovych and Trump are being drawn not only because of their common association with Paul Manafort, adviser to the first, campaign chairman for the second, but also because Russian experts and politicians consider both of them to be openly pro-Kremlin.

Tightly controlled Russian state-television programs constantly reiterate that Trump doesn’t care about Ukraine and gave Putin no reasons to even contemplate concessions in the run-up to the recent Normandy Four summitin Paris.

State-television news shows use every opportunity to demoralize the Ukrainians with a set of talking points based on the U.S. president’s distaste for their beleaguered country. The host of Who’s Against on Rossiya-1, Dmitry Kulikov, along with pro-Kremlin guests, took repeated jabs at the Ukrainian panelist, boasting about the meeting between Trump and Lavrov.

“There are no disagreements or contradictions between Trump and Russia,”argued Valery Korovin, director of the Center for Geopolitical Expertise, appearing on the state-television channel Rossiya-24. Korovin insisted that the Democrats in Congress are the main antagonists in the relationship between Russia and the United States.

Dmitry Kiselyov, the host of the Sunday news show Vesti Nedeli, accused the Democrats of joining forces with Hollywood, carrying out various conspiracies in order to undermine Trump’s popularity. Reporting for Vesti Nedeli from Washington, Mikhail Antonov used the term “the Cold War,” a fraught rhetorical twist to describe the clash between Trump and the Democratic majority in the House of Representatives.“Putin has expressed undisguised delight with the crusade led by Trump and Giuliani to whitewash Moscow’s interference in the U.S. elections.”

Why Is the GOP So Anxious to Play Putin’s Game on Ukraine?The Worst Thing About Rudy’s Trip to UkraineThe Shady Ukrainians Defending Trump on Giuliani’s TV Show

Appearing on Sunday Evening With Vladimir Soloviev, Mikhail Gusman noted: “The scariest part of our relationship with America is that the level of trust between our countries, our governments, our political powers, is precisely at zero.”

“But not between the presidents,” chimed in the host.

Rudy Giuliani, acting as the president’s personal attorney and determined to divert attention from Trump’s impeachment to former Vice President Biden’s alleged corruption, recently embarked on an “evidence-gathering” trip to Ukraine. Shortly after Giuliani’s return to the United States, Russian state television started airing video clips of his OAN (One America News Network) “documentary.” It purports to prove Kyiv’s meddling in U.S. elections and accuses former Ambassador Marie Yovanovitch of “lying under oath in Congress to whitewash [Joe] Biden’s corruption.” Giuliani’s efforts on behalf of President Trump are bound to pay propaganda dividends for the Kremlin.

Rossiya-1 reporter Valentin Bogdanov surmised that by now the majority of American Republicans believe that Ukraine interfered in the U.S. elections, with the show airing various clips from Fox News.

The absurdity of such claims spawned by the Russian security services puts the hypocrisy of the Republicans on full display. The Kremlin, having argued for years that democracy is a sham and the West is devoid of morals and principles, can now showcase the GOP as its “Exhibit A.”

Appearing on The Evening With Vladimir Soloviev in October, political scientist Dmitry Evstafiev argued that Trump has to destroy the Republican Party in order to secure his own long-term survival. The impeachment proceedings seemed to expedite the process, with the GOP’s self-immolation for the sake of its “Dear Leader.”

Prompted by the head-spinning swerve of the Republicans, Tucker Carlson of Fox News even argued that, in the Ukrainian conflict, the U.S. should be taking the side of Russia. Kremlin-controlled Russian state media doesn’t suffer from a similar lack of clarity.

Appearing on Soloviev’s show, Semyon Bagdasarov, director of the Moscow-based Center for Middle Eastern and Central Asian Studies, exclaimed: “The United States is the enemy. It is our enemy. It is a hostile state that aims to destroy our country… We are at war!”