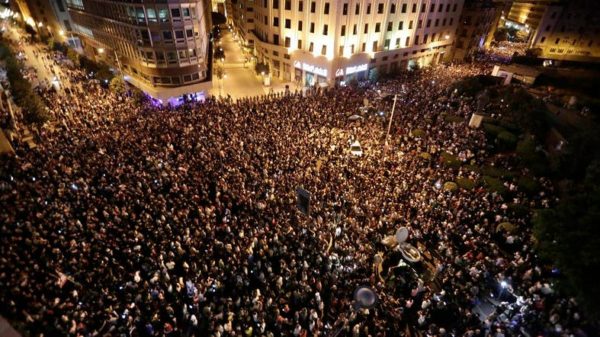 Protesters have decried Lebanese President Michel Aoun’s decision to postpone parliamentary consultations for the naming of a new prime minister at the request of Saad Hariri, the only candidate for the post.
The binding consultations are now delayed until Thursday in response to “(caretaker) Premier Hariri’s wish to allow for more consultations on the issue of forming the government,” the presidency said in a statement.
“We do not want any of you, including Hariri,” shouted the protesters in central Beirut.
Dozens of protesters stood near a street leading to Hariri’s residential complex in central Beirut waving Lebanese flags.
Riot police erected barbed wires fences on roads leading to the residence and formed a human barrier to prevent protesters from approaching.
“We do not trust any of you,” one protester’s placard read.
Anti-government demonstrators gathered yesterday evening to reject Hariri’s nomination, demanding that an “independent” be nominated instead.
Protesters have called for a government of technocrats rather than politicians from the ruling class, to help revive the country’s battered economy.
Lebanon has been gripped by street protests since mid-October and the economic and political turmoil there has generated Lebanon’s worst crisis since the 1975-1990 civil war.
The protests prompted Prime Minister Saad Hariri to resign on October 29.
According to a source close to Hariri, “the coming 72 hours will be crucial” — the former premier is still insisting on forming a government of experts.
The source said that if Hariri cannot secure his demand he is likely to say “look for another person to head the government.”
Hariri was expected to be named as premier during the consultations, which were scheduled for yesterday at the presidential palace.
Hariri’s request for postponement came after two main parliamentary blocs decided not to back him, which would have affected the number of votes he was expected to receive.The United Nations Special Co-ordinator for Lebanon Jan Kubis said that the postponement is risky amid a collapsing economy.
An “investigation of the incidents as well as of use of excessive force by the security forces is necessary, also to prevent sliding down towards more aggressive and confrontational behaviour of all,” Kubis wrote in a tweet.
President Aoun was due to hold talks with various parliamentary blocs following two nights of clashes between anti-government protesters and riot police.
Clashes erupted between riot police and demonstrators in central Beirut after protesters hurled stones at police and attempted to break barriers around the parliament building.
The internal security police said in a statement that 27 police officers, along with two officers, were wounded on Sunday night. Demonstrators said dozens suffered breathing problems from the firing of tear gas as well as medium injuries from the use of excessive force by riot police.
Protesters said that the violence was carried out “by infiltrators who belong to the two the groups, Hezbollah and the Amal movement.”
According to the Lebanese constitution, the president has to consult with parliamentary blocs before he tasks a premier with forming a new government.