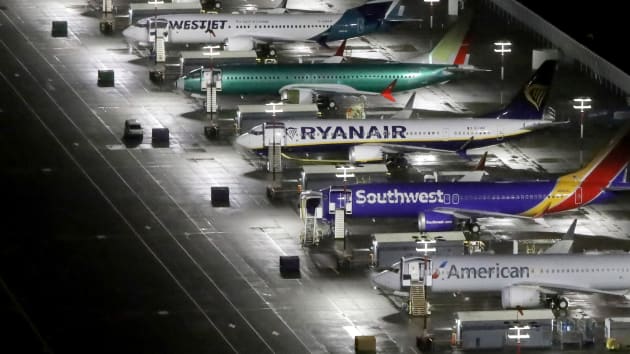 Boeing is planning to suspend production of its beleaguered 737 Max planes next month, the company said Monday, a drastic step after the Federal Aviation Administration said its review of the planes would continue into next year.

The decision is likely to ripple through the aerospace giant’s supply chain and present further complications for airlines, which have lost hundreds of millions of dollars and canceled thousands of flights without the fuel-efficient planes in their fleets.

Boeing last week acknowledged that regulators’ review of the planes — grounded since March after two crashes killed 346 people — would last until the following year, longer than the end-of-year approval the Chicago-based manufacturer was targeting.

Boeing said it does not plan to lay off or furlough workers at the Renton, Washington, factory where the 737 Max is produced during the production pause, according to a source familiar with the matter. Some of the 12,000 workers there will be temporarily reassigned.

Just how long Boeing will keep its 737 Max production line halted was not immediately clear, because it will depend on when regulators clear the plane to fly again. U.S. airlines have taken the planes out of their schedules until at least March. American last week said it doesn’t expect to fly the planes before April.

“We know that the process of approving the 737 Max’s return to service, and of determining appropriate training requirements, must be extraordinarily thorough and robust, to ensure that our regulators, customers, and the flying public have confidence in the 737 Max updates,” Boeing said in a statement. “The FAA and global regulatory authorities determine the timeline for certification and return to service. We remain fully committed to supporting this process. It is our duty to ensure that every requirement is fulfilled, and every question from our regulators answered.”

Boeing had repeatedly warned investors that it could further cut or suspend production of the planes altogether if the flight ban lasts longer than expected, as it has. Boeing slashed production by 20% in April to 42 a month after regulators ordered airlines to stop flying the planes.

Close to 400 Max planes were in global fleets when regulators grounded the planes in mid-March after two fatal crashes in a span of five months.

Since then, Boeing has produced some 400 more of the jetliners, which are parked at its facilities in Washington state and elsewhere. The grounding, now in its 10th month, has prevented Boeing from delivering planes to customers, and the company said halting production would help it deliver the stored planes when the grounding is lifted.

Boeing shares, which fell more than 4% during the regular session, were down 1% in after-hours trading. Spirit AeroSystems, which makes fuselages for the 737 Max, was down more than 5% postmarket.