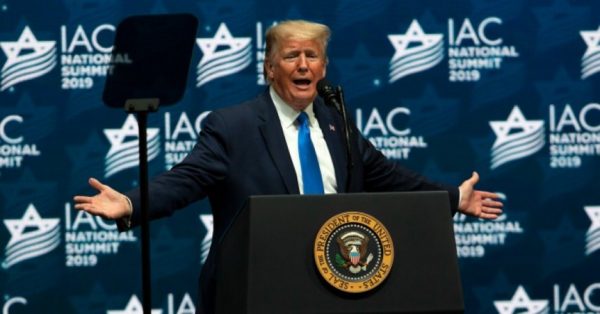 Donald Trump has been accused of anti-Semitism after claiming that American Jews who vote for Democrats show “either a total lack of knowledge or great disloyalty.”
Share:

Donald Trump has been accused of antisemitism after he told a pro-Israel Jewish group they will vote for him to protect their wealth.

Mr Trump referred to members of the Israeli American Council as “brutal killers” and “not nice people” but claimed they would vote for him to avoid a wealth tax, as proposed by Democratic challengers Bernie Sanders and Elizabeth Warren.

“A lot of you are in the real estate business because I know you very well, you’re brutal killers. You’re not nice people at all, but you have to vote for me. You have no choice,” the president said.

He continued by repeating a false claim to the crowd that supporters of the tax want to take “100 per cent of your wealth away”.

“Even if you don’t like me – some of you don’t [and] some of you I don’t like at all actually – you’re going to be my biggest supporters because you’ll be out of business in about 15 minutes if they [the Democrats] get in,” he added.

Mr Trump’s stereotyping of members of a Jewish organisation as being politically motivated by money was condemned as antisemitic.

“It’s not even coded antisemitism. It’s not a dog-whistle. He’s saying this. Out loud. To a room full of Jews,” Danya Ruttenberg, an American rabbi and author, wrote on Twitter.

Earlier in the speech, Mr Trump also questioned the loyalty of American Jews to Israel.

“We have to get the people of our country, of this country, to love Israel more,” he told the crowd.

“Because you have people that are Jewish people, that are great people – they don’t love Israel enough.”

“Trump’s insistence on using antisemitic tropes when addressing Jewish audiences is dangerous and should concern every member of the Jewish community – even Jewish Republicans,” he said.

The president’s comments on Saturday were not the first time he has been accused of antisemitism.

During his presidential campaign in 2015, Mr Trump used an antisemitic trope about the influence of Jewish people in politics when he spoke to the Republican Jewish Coalition.

He told the group: “You’re not going to support me because I don’t want your money. You want to control your politicians, that’s fine.”

In August 2019, Mr Trump also said any Jewish person who voted for the Democratic Party was showing “a total lack of knowledge or great disloyalty”.

The suggestion that American Jews have dual loyalty to Israel and the US drew sharp criticism and accusations of racism.

“If this is about Israel, then Trump is repeating a dual loyalty claim, which is a form of antisemitism,” Halie Soifer, executive director of the Jewish Democratic Council of America, said after Mr Trump’s comments.

“If this is about Jews being ‘loyal’ to him, then Trump needs a reality check.”