Lebanon is not a Hezbollah State. It is the alternative state 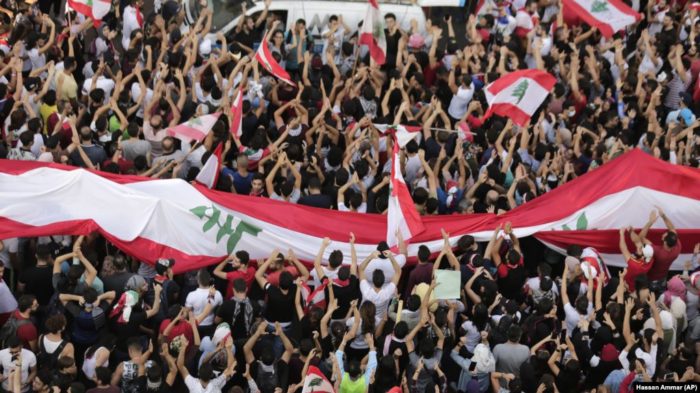 Demonstrators carry the national flag and banners during an anti-government protest in downtown Beirut, Lebanon October 21, 2019. Hundreds of thousands of Lebanese, from all walks of life and throughout the country, have been protesting the entire socioeconomic and political establishment. Their anger isn’t directed primarily against Hezbollah or Iran, but against the entire power structure in the country, which they blame for mismanaging the economy and enriching itself at the expense of the general population. REUTERS/Ali Hashisho.
Share:

On Monday, the Trump administration finally released $105 million in annual aid to the Lebanese Armed Forces that had been appropriated by Congress but, like the more notorious hold on military assistance to Ukraine, was inexplicably delayed by the White House.

Better late than never, particularly since the Lebanese military has been protecting protesters in the streets of Beirut and other cities from intimidation by the pro-Iranian militias of Hezbollah and Amal.

The Lebanese protests, now coming close to their third month, are a powerful rebuttal to the pernicious notion that all of Lebanon, or even just the Lebanese state, is simply an extension or a tool of Hezbollah, and should be therefore treated as a terrorist entity and pariah.

Hundreds of thousands of Lebanese, from all walks of life and throughout the country, have been protesting the entire socioeconomic and political establishment. Their anger isn’t directed primarily against Hezbollah or Iran, but against the entire power structure in the country, which they blame for mismanaging the economy and enriching itself at the expense of the general population.

Obviously, this threatens everyone who benefits from the status quo. But the threat to Hezbollah and its allies is particularly severe.

Through force and guile, Hezbollah has maneuvered over the decades to maximize its influence in Lebanon, ensuring that it remains the most potent armed force in the country, while minimizing its responsibility for the failures of the state.

It poses as a revolutionary group focused on combating Israel and only a small party of the government with a few minor ministries. In reality, it is by far the most powerful force in the country, maintaining its own foreign and defense policies, independent of the Lebanese government.

Hezbollah initially pretended to side with the protesters. But its leader, Hassan Nasrallah, quickly changed his tune and decided that the protests were “inauthentic” and manipulated by foreign “hidden hands.”

This is because any profound change to the political order in Lebanon must have one of two negative effects for Hezbollah. If the upheaval leads to real change, the group’s leverage can only decrease. Alternatively, if things don’t change, Hezbollah will become increasingly associated in the public mind with the corruption and repression that props up the system that maximizes its influence. Hezbollah’s bluff will be called, and its role exposed. Either outcome is a long-term threat to Hezbollah’s credibility and power.

So, the organization has been trying to disrupt the protests through threats and intimidation by goons. Protesters from Shiite communities have been repeatedly filmed “apologizing” to Hezbollah and its leadership, or to the state, for “insulting” them in the demonstrations. This is a familiar strong-arm tactic, in which the gun behind the camera cannot be seen by the viewer but is clearly evident in the expression of the victim. It has also been deployed by the regime in Tehran to try and undermine recent protests in Iran.

This is why supporting the Lebanese army is urgent and important. The army is the primary national institution that can serve as a bulwark against thoroughgoing Hezbollah domination. In recent weeks, it has repeatedly intervened on behalf of the demonstrators when they were attacked by gangs of Hezbollah and Amal thugs.

It is likely that the original impulse to withhold the congressionally-appropriated U.S. aid to the Lebanese military originated from the wrongheaded notion that Lebanon equals Hezbollah and therefore shouldn’t get any American support. Senator Chris Murphy, who lobbied for the release of the funds, has said that “there is at least one person at the [National Security Council] who wants to punish Lebanon for having a political relationship with Hezbollah.” Given that numerous commentators with close ties to the administration have been pushing for just such a perspective, that’s not surprising.

But the protests, and the army’s performance in recent weeks, have shattered this myth.

The protests represent the rejection of the sectarian order in Lebanon, and the resurrection of the pre-Civil War vision of Lebanon as a modern, unified nation-state with a national consciousness beyond communalism. That threatens much of the power structure, but it is a mortal danger to Hezbollah and its nefarious state-within-a-state in Lebanon.

Everyone interested in combating Hezbollah domination of Lebanon and power in the Middle East ought to take advantage of this opportunity and understand that the Lebanese state isn’t equivalent to Hezbollah. To the contrary, it is the alternative to Hezbollah. As such, it deserves support rather than isolation.

Hussein Ibish is a senior resident scholar at the Arab Gulf States Institute in Washington. and is active in advocacy for Arab causes in the United States. He served as the Communications Director for the American-Arab Anti-Discrimination Committee (ADC) from 1998 to 2004