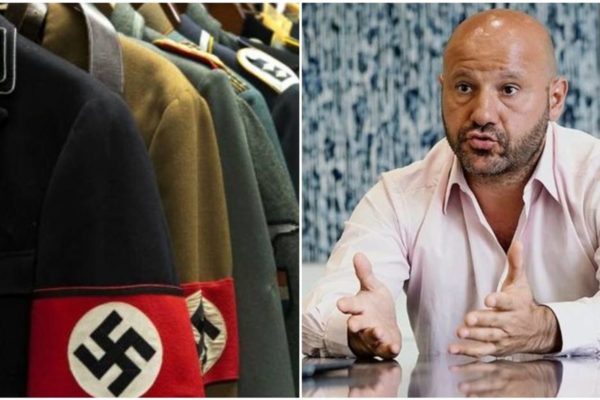 Lebanese businessman Abdallah Chatila buys $660,000 worth of Nazi ‘memorabilia’ so it can’t be used as anti semitism propaganda
Share:

Jerusalem (AFP) – A wealthy Lebanese-Swiss businessman said Sunday he had bought Adolf Hitler’s top hat and other Nazi artifacts to give them to Jewish groups and prevent them falling into the hands of a resurgent far-right.

Abdallah Chatila said he had felt compelled to take the objects off the market because of the rising anti-Semitism, populism and racism he was witnessing in Europe.

He spent about 600,000 euros ($660,000) for eight objects connected to Hitler, including the collapsible top hat, in a November 20 sale at a Munich auction house, originally planning to burn them all.

But he then decided to give them to the Keren Hayesod association, an Israeli fundraising group, which has resolved to hand them to Israel’s Yad Vashem Holocaust memorial centre.

Chatila told a Jerusalem press conference it had been a “very easy” decision to purchase the items when he saw the “potentially lethal injustice that those artifacts would go to the wrong hands”.

“I felt I had no choice but to actually try to help the cause,” he added.

“What happened in the last five years in Europe showed us that anti-Semitism, that populism, that racism is going stronger and stronger, and we are here to fight it and show people we’re not scared.

“Today — with the fake news, with the media, with the power that people could have with the internet, with social media — somebody else could use that small window” of time to manipulate the public, he said.

He said he had worried the Nazi-era artifacts could be used by neo-Nazi groups or those seeking to stoke anti-Semitism and racism in Europe.

“That’s why I felt I had to do it,” he said of his purchase.

The items, still in Munich, are to be eventually delivered to Yad Vashem, where they will be part of a collection of Nazi artifacts crucial to countering Holocaust denial, but not be put on regular display, said Avner Shalev, the institute’s director.

Chatila was born in Beirut into a family of Christian jewellers and moved to Switzerland at the age of two.

Now among Switzerland’s richest 300 people, he supports charities and causes, including many relating to Lebanon and Syrian refugees.

The auction was brought to Chatila’s attention by the European Jewish Association, which has sought to sway public opinion against the trade in Nazi memorabilia.

He said it was a powerful statement against racism and xenophobia, especially coming from a non-Jew of Lebanese origin.

Lebanon and Israel remain technically at war and Lebanese people are banned from communication with Israelis.

The message was not only about solidarity among people, but also “how one person can make such a huge change,” Margolin said.

“There’s a place for optimism.”