France’s Macron accuses Turkey of ‘working with IS group proxies’ 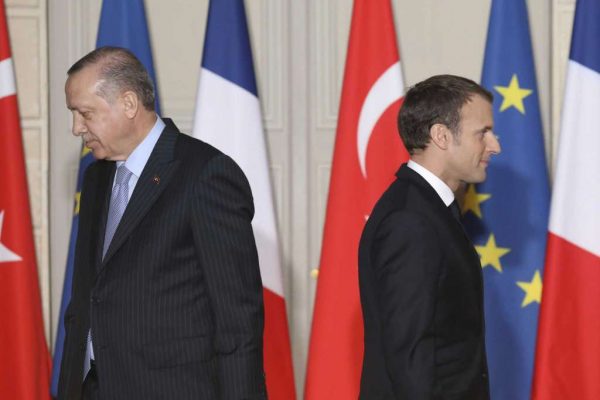 French President Emmanuel Macron accused Turkey on Tuesday of working with Islamic State proxies and said Ankara’s ambiguity towards the group was detrimental to its NATO allies fighting in Syria and Iraq.

“The common enemy today is the terrorist groups. I’m sorry to say, we don’t have the same definition of terrorism around the table,” Macron told reporters.

“When I look at Turkey they are fighting against those who fought with us shoulder to shoulder against ISIS (Islamic State) and sometimes they work with ISIS proxies.”

Turkey has threatened to block a plan to defend Baltic states and Poland against Russian attacks unless the alliance backs Ankara in recognising the Kurdish YPG militia as a terrorist group.

The YPG’s fighters have long been U.S. and French allies on the ground against Islamic State in Syria. Turkey considers them an enemy because of links to Kurdish insurgents in southeastern Turkey.

“I think any ambiguity with Turkey vis-a-vis these groups is detrimental to everybody for the situation on the ground,” Macron said. “The number one (priority) is not to be ambiguous with these groups, which is why we started to discuss our relations with Turkey.”

In an at times awkward news conference with Trump, Macron appeared exasperated when the U.S. president said he would pass the question to Macron on whether France should do more to bring French ISIS fighters home.

Paris has about 400 nationals, including around 60 fighters, held in northern Syria. It has refused to bring adults home saying they must face trial where their crimes were committed.

“Would you like some nice ISIS fighters? You can take everyone you want,” Trump said in a light-hearted tone.

Visibly irritated, Macron responded, saying “let’s be serious” and argued that number of foreign fighters from European countries was small, and that it would be unhelpful to focus on them rather than on the broader problem.

Trump suggested Macron had not answered the question.
“This is why he is a great politician because that was one of the greatest non-answers I have ever heard, and that’s OK,” Trump said.