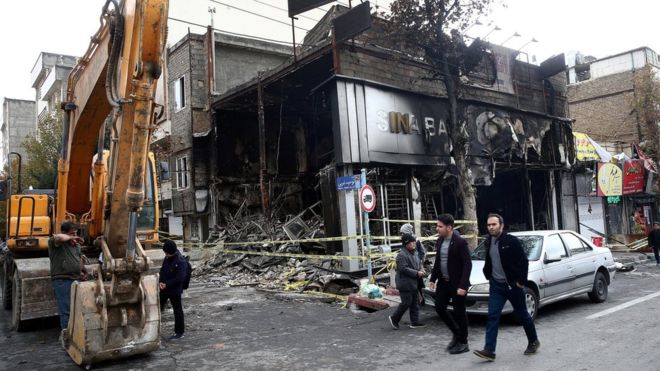 A minister said 731 banks and 70 petrol stations were set ablaze during the unrest
Share:

Activists have accused the authorities of deliberately covering up the scale of the crackdown on the four days of unrest in more than 100 locations.

Amnesty International has said at least 208 people were killed, but others have put the death toll at close to 400.

A judiciary spokesman has dismissed such reports as “utter lies”.

The authorities have not yet released any overall casualty figures.

The protests erupted in cities and towns across Iran on 15 November, after the government announced that the price of petrol would rise by 50% to 15,000 rials a litre ($0.12; £0.09 at the unofficial market exchange rate), and that drivers would be allowed to purchase only 60 litres each month before the price rose to 30,000 rials.

The decision was met with widespread anger in a country where the economy is already reeling as a result of US sanctions that were reinstated last year when President Donald Trump abandoned a nuclear deal with Iran.

The authorities’ decision to almost completely shut down access to the internet made it hard to gather information about what was happening on the streets, but the video footage that reached the outside world appeared to show security forces shooting at unarmed demonstrators.

Interior Minister Abdolreza Rahmani Fazli said last week that as many as 200,000 people took part in the protests, and 731 banks, 70 petrol stations and 140 government sites were set ablaze. More than 50 security bases were also attacked, he added.

On Monday night, Iran’s state-run IRTV2 channel broadcast a report confirming that there were fatalities during the unrest, but did not give any figures. It categorised those killed as “armed thugs and rioters”, security personnel, passers-by hit by crossfire or victims of “suspicious shootings”.

A correspondent said “rioters” had attacked sensitive or military sites with guns or knives, and taken people hostage, leaving security forces with no choice to “resort to authoritative and tough confrontation” to save lives.

In the south-western city of Mahshahr, the correspondent added, “separatists” armed with machine-guns blocked roads and planned to blow up a petrochemical complex. In an interview, the city’s police chief said “wise” security forces “thwarted” an armed attack by people hiding in a local marsh.

On Sunday, the New York Times cited witnesses and medics in Mahshahr as saying that members of the Revolutionary Guards surrounded, shot and killed 40 to 100 demonstrators in a marsh where they had sought refuge.

IRTV2’s report also mentioned that security forces had confronted rioters in Tehran and the suburb of Shahriar, and in the southern cities of Shiraz and Sirjan.

Amnesty International said on Monday that it had compiled its nationwide death toll of 208 from reports whose credibility it ascertained by interviewing a range of sources, including victims’ relatives, journalists and human rights activists. But it warned that the actual number was likely to be higher.

Other rights groups and sources inside Iran said the death toll was close to 400.

During a visit to London on Tuesday, President Trump said Iran was “killing perhaps thousands and thousands of people right now as we speak.” He added: “It is a terrible thing and the world has to be watching.”

Judiciary spokesman Gholamhossein Esmaili told reporters in Tehran that “the numbers and figures that are being given by hostile groups are utter lies, and the [official] statistics have serious differences with what they announced”.

Mr Esmaili also said that most of those detained “during the riots” had been released. The judiciary, he added, was evaluating “efficiently and with precision” the cases of those still in custody, including about 300 people in Tehran.

Hossein Naqavi-Hosseini, a member of parliament’s national security committee, said last week that about 7,000 people were arrested during the unrest.