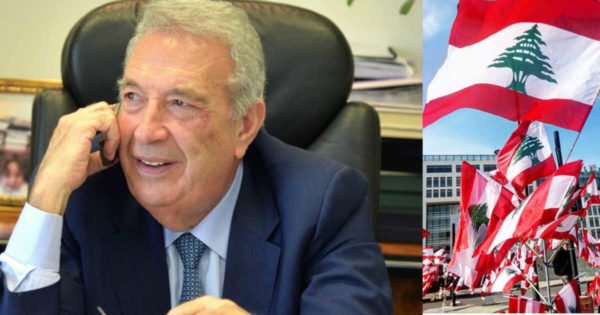 Lebanon’s outgoing Prime Minister Saad Hariri said Tuesday he supports the nomination of a prominent contractor to become the next premier, a move that will likely pave the way for the formation of a new Cabinet amid a severe economic and financial crisis.

The news of the possible nomination of Samir Khatib, the head of a major contracting and construction company, sparked spontaneous late-night protests. Hundreds gathered at a strategic intersection in Beirut, known as the Ring Road, blocking the road and chanting against Khatib. Security forces tried to prevent the protesters from blocking the road that links east to west Beirut, and after a warning, used tear gas to disperse them.

After briefly dispersing, protesters attempted to gather again to block the road.

Hariri resigned on Oct. 29 amid nationwide protests and a stalemate with political rivals over forming a new government. Meanwhile, Lebanon, one of the world’s most indebted countries in terms of debt-to GDP ratio, is reeling under the pressure of an unprecedented economic crunch that has only worsened amid the political crisis.

The currency has lost nearly 40 percent of its value in the face of the dollar. Lebanon is also grappling with high unemployment and an expected sharp contraction of the economy in 2020. Local banks have imposed capital control measures unseen before in the country known for its free-market economy.

Hariri withdrew his candidacy last week, saying he hoped it would clear the way for a solution to the political impasse amid nearly eight weeks of protests.

Speaking to reporters Tuesday night, Hariri said he backs Khatib to become the next prime minister. “There are still some details and God willing something good” will happen, he said. “Everyone is trying to get through this difficult period.”

Khatib heads one of Lebanon’s largest engineering and contracting companies and did not hold any political roles in the past. The protesters perceive him as too close to the ruling elite, against which they have been protesting, though it is not clear if his official nomination would spark wider protests.

Over the past weeks, politicians failed to agree on the shape and form of a new government. Hariri had insisted on heading a government of technocrats, while his opponents, including the militant group Hezbollah, want a Cabinet made up of both experts and politicians.

Asked if he is going to take part in the new Cabinet, Hariri said: “I will not nominate political personalities but experts.”

The protesters have been demonstrating against widespread corruption and mismanagement in the country. They have resorted to road closures and other tactics to pressure politicians into responding to their demands of forming a new government and holding new elections.

They have insisted that a new Cabinet be made up of independent figures outside the elite who have been running the country since the 1975-90 civil war ended.

President Michel Aoun now is expected to call for binding consultations with heads of parliamentary blocs to name the new prime minister. But since Hariri, the most powerful Sunni leader in the country, said he will back Khatib, the contractor is widely expected to get the post.

Earlier in the day, outgoing Foreign Minister Gebran Bassil hinted that he will not be part of the new government telling reporters that “the success of the Cabinet is more important than our presence in it.

The protests late Tuesday come a day after protesters hurled stones at soldiers while opening a highway south of Beirut, injuring several troops. The Lebanese army said in a statement on Tuesday that one of the protesters in the town of Naameh fired bullets from a pistol the night before adding that the shooting made the troops fire in the air to disperse the protesters.