To Make Sense of Lebanon’s Protests, Follow the Garbage 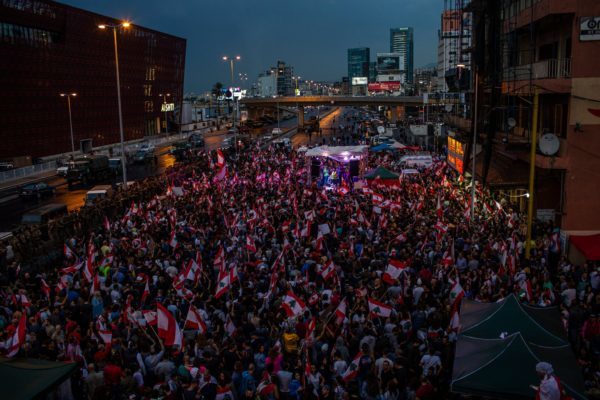 Government failures have driven hundreds of thousands of protesters into the streets over the last six weeks. Credit…Diego Ibarra Sanchez for The New York Times
Share:

The country’s perpetual refuse crisis is just one example of the government corruption and dysfunction that have brought protesters into the streets.

By Vivian Yee and Hwaida Saad

BEIRUT, Lebanon — In Lebanon, its people like to boast, you can take in pristine mountain villages and swim in the shimmering sea all in one day.

But the country’s blond-sand beaches are now scarred with plastic bottles and its mountain streams befouled by open dumps. The Mediterranean gurgles with toxic runoff from rotting garbage. A seemingly unstoppable proliferation of trash has marred Lebanon’s water, seafood and public health.

The government’s inability to provide basic services, including 24-hour electricity and garbage collection, is rooted in an agreement that ended Lebanon’s civil war nearly 30 years ago. The deal divided power between the nation’s 18 recognized religious sects, effectively institutionalizing corruption, with each group able to dole out government jobs, contracts, favors and social services to its followers.

The Lebanese have finally had enough of a system that has enriched the political elite while failing to build a stable economy or provide basics like reliable running water or consistent waste management.

Over the last six weeks, hundreds of thousands of protesters have massed in the streets, chanting “Give back the looted money!”

They have already forced out the prime minister, but their goals are broader: They are demanding an end to corruption and mismanagement, as well as the crony sectarianism that enables it.

The perpetual garbage crisis is only the most pungent example. It last exploded into public view in 2015, when the country’s political elite squabbled over a lucrative waste-management contract as mountains of uncollected trash fouled the streets of Beirut. A wave of protests ensued.

The stopgap solution was to build two new landfills. Three years after they opened, the landfills have only relocated the garbage crisis to the coast, and they are fast threatening to hit capacity.

The $288 million contract for one landfill went to Jihad al-Arab, the brother of an aide to the recently ousted prime minister, Saad Hariri, a Sunni Muslim. According to three people familiar with the company’s operations, it is adding water to the garbage containers that arrive each day to inflate their billable weight.

The other contract, worth $142 million, went to Dany Khoury, a Christian businessman said to be close to the family of President Michel Aoun, Lebanon’s top Christian leader. At this landfill, experts found, employees dumped trash and toxic waste directly into the Mediterranean.

Both companies deny the accusations, but one thing is certain: At least $430 million later, Lebanon’s garbage issues are little closer to resolution.

“Garbage,” said Paula Yacoubian, an independent member of Parliament who has repeatedly questioned how public money has been spent on electricity and infrastructure projects, “is like a gold mine for the political caste.”

The issue is not limited to garbage — nor to a few politicians.

When a controversial resort called Eden Bay swallowed part of Beirut’s last public beach last year, many Lebanese were not surprised to learn that the developer was a former son-in-law of Nabih Berri, the speaker of Parliament and the top Shiite in government.

A major reason that Lebanon does not produce enough electricity for its four million people, experts say, is the powerful lobby of generator owners, whose machines provide power during daily blackouts, as well as the $1.2 billion-a-year diesel industry that fuels them. One of the major fuel importers, Cogico, is owned by Walid Jumblatt, the leader of the Druze minority.

When Gebran Bassil, the son-in-law of President Aoun, pushed to buy extra electricity from Turkish power barges anchored just offshore, some officials asked why the government was spending hundreds of millions of dollars to rent the barges instead of building its own plants. Some politicians said that a government official had received millions of dollars in kickbacks, but they did not publicly identify the person and nothing was ever proved.

“It’s a pity to have such leaders,” said Abdo Farah, a fisherman who has trawled the waters around Beirut for 34 years, pushing farther out in search of clean fish as sewage, industrial runoff and garbage soiled the coast unchecked. “We’re living in a trash can.”

Much of the sectarian deal-making takes place at the Council for Development and Reconstruction, the opaque government agency that awards contracts for most of Lebanon’s major infrastructure projects.

The contracts are usually paid for with the billions Lebanon has received in aid from the World Bank, European countries and other international donors for postwar reconstruction and development.

The council’s procurement rules are “notoriously lax,” the United States Embassy in Beirut reported in a February 2009 State Department cable published by WikiLeaks. The Lebanon manager for the World Bank at the time, Demba Ba, told American diplomats that he was “constantly fighting C.D.R.’s declarations that it ‘already has a contractor’ for projects,” the cable said, “usually someone either associated with the P.M. or whom the P.M. needs to compensate for a political or financial favor.”

The council has been run for years by Nabil el-Jisr, a longtime former employee and ally of the Hariri family. But its board also includes a Christian, a Druze and a Shiite who happens to be a brother of Mr. Berri, the Parliament speaker.

Hospitals, roads, schools and other projects are distributed to favored contractors according to sectarian quotas that ensure every group benefits, regardless of necessity, said Jad Chaaban, an economist at the American University of Beirut who has analyzed the council’s spending.

“They’ll tell you, ‘Well, we had to balance it in a sectarian way because we can’t only build schools in mostly Sunni areas, we also have to do Christian areas,’” he said. “They hide behind sectarianism to fund their patronage networks and their cronies.”

Sectarian connections determine not only government contracts but access to coveted government jobs, schools, bureaucratic favors and, occasionally, social services. A system meant to foster peaceful coexistence has only reinforced sectarian divisions, making most Lebanese dependent on the good graces of their sects’ leaders — and each sect more determined to fight for every government dollar and favor.

So it was no surprise when, in 2016, the Council for Development and Reconstruction turned to Mr. Khoury, the Christian businessman linked to Mr. Aoun, and to Mr. al-Arab, the Sunni Muslim contractor linked to Mr. Hariri, to help solve Lebanon’s garbage emergency.

Mr. Khoury took over an old landfill at Bourj Hammoud, north of Beirut, with plans to expand it into the sea.

Najat Saliba, a chemist at the American University of Beirut who inspected the site in 2017, found that Mr. Khoury’s company was dumping trash into the landfill without sorting it, despite a contractual requirement that recyclables be separated and hazardous material be removed.

Moreover, she found, the landfill’s breakwaters in the Mediterranean were not keeping the trash out of the water. Garbage and the toxic liquid oozing from it were going straight into the sea.

The contractor has said that it was not sorting the garbage because doing so would delay the project. It told Dr. Saliba that the sea had been polluted by sewage and other runoff, not by the landfill.

A lawyer for Mr. Khoury, Mark Habka, said last week that all standards were now being met.

But workers at the sorting plants have made little attempt to sort much of what arrived, according to three people familiar with their operations.

They also said that they had seen workers using hoses to add water to the garbage before weighing it, increasing the cost to the government.

The three people include two who visited the sorting operation in 2017 and a third person familiar with the plants’ current operations who confirmed that these methods persist. These people asked not to be identified, fearing physical harm for speaking out.

Representatives of Mr. al-Arab’s company, Al Jihad for Commerce and Contracting, contacted this November, insisted that all the trash was sorted properly. But internal plant data from July 2018 shows that 93 percent of the waste was being dumped into landfills.

Hisham Karameh, Al Jihad’s waste management director, denied that the company played any tricks with the weighing, saying the weighing was monitored by representatives from the company, the government, the municipality and outside consultants.

Despite such questions, the development council has repeatedly fattened Al Jihad’s contract, agreeing in a series of add-ons to pay the company an additional $161 million to upgrade and expand the operation, without opening the process to new bids.

Mr. Karameh insisted the process was fair. “What we’ve won, we’ve won fairly,” he said. “Every businessman in Lebanon is related to someone in politics.”

Both Al Jihad and the council said the company had submitted the lowest bid for the original contract.

While businessmen and politicians have grown richer, the trash crisis has only grown harder to ignore.

“Money from all these donating governments has been wasted in pretending to do these constructive reform projects,” Dr. Saliba said. “And nothing’s been happening.”

By last summer, Costa Brava’s neighbors had had enough. Local residents blocked garbage trucks from entering, calling on the government to produce a sustainable solution.

“It seems like the dumping will only stop after the trash reaches Cyprus,” said Ziad Haidar, the mayor of Choueifat, a nearby municipality. “But what can we do? If we kept blocking the road, you’d see trash everywhere on the streets.”

For several years, the government has promoted incineration as a long-term solution, despite objections from environmentalists and scientists.

In June, the environment minister, Fadi Jreissati, told The Daily Star, a local newspaper, that he did not think Lebanon was “qualified” to regulate the incinerators.

Less than two months later, the cabinet approved his plan to build more landfills and three incinerators. The development council was tasked with scoping out potential sites.