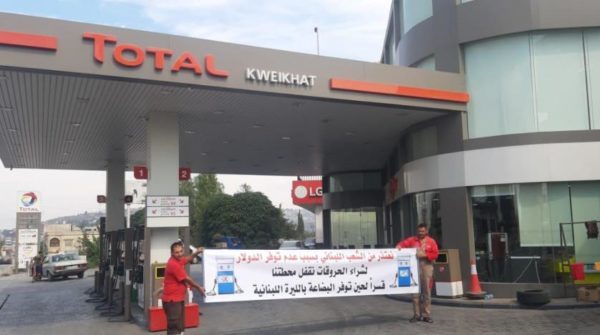 BEIRUT (Reuters) – Lebanon’s petrol stations will begin an open-ended strike on Thursday nationwide, a union representing them said on Wednesday, amid the country’s worst economic crisis in decades.

Protests that have swept Lebanon since Oct. 17 have added to deep strains in the financial system, worsening a hard currency crunch that has hit the ability of many importers to bring in goods.

The union said it was striking because of losses sustained while using a parallel market for dollars relied on to import fuel, according to a statement cited by state news agency NNA.

The Lebanese pound’s value on the parallel market, the only source of dollars for most importers, has slumped since the protests erupted, currently trading about 40% weaker than the official rate.

The central bank said last month that it would prioritize foreign currency reserves for fuel, medicine and wheat, but buyers tapping the facility are still required to supply 15% of their own dollar needs.

Lebanon’s energy ministry is set to trial a state tender for gasoline next month after fuel importers threatened to raise prices. The ministry sets price guidelines for fuel stations, who typically import the gasoline themselves.

The Lebanese Economic Bodies, a private sector group that includes industrialists and bankers, called off a separate three-day strike that was also to start Thursday, citing tough economic conditions and the need for employees to collect end-of-month salaries.