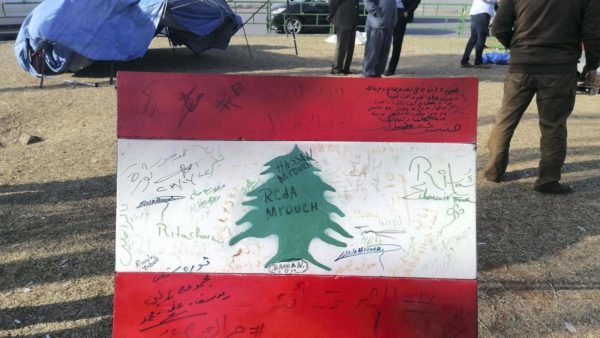 A flag in Tyre, Lebanon. Sunniva Rose / The National
Share:

Protesters returned to the streets of Hezbollah stronghold Tyre on Tuesday in defiance of attacks by the group’s supporters the previous night.

The last big coastal city before the Israeli border, Tyre was the site of violent clashes on Monday after a mob of young men supporting Hezbollah and ally Amal burned down a tent set up by protesters on one of the city’s main squares.

Undeterred, dozens turned out in Tyre late on Tuesday afternoon from the neighbouring cities of Saida and Nabatieh to show their support, and a new tent was erected.

Protesters said that the mob was trying to cause ruptures within the movement.

“Those who attacked us are not with the people, they are with the power,” student midwife Rita Chouceir, 28, told The National. “Half the protesters here are Shiite. They are trying to divide us.”

A bus full of schoolchildren drove past chanting “revolution” and cars blared their horns.

These small gestures of moral support kept the protesters going when many of those who had originally joined stopped showing up because of the threats, Ms Chouceir said.

She said that the protests would eventually achieving their goals, including a government of independent specialists who would fight the corruption that plagues Lebanon.

“The protests are not over otherwise they would have no reasons to attack us,” Ms Chouceir said. “It’s a sign that they are under pressure.”

Speaking to a crowd of demonstrators from a stage that had been broken during the attacks, beautician Amal Wazny, 46, said she had been surprised by the assault.

“Our demands are the same as theirs. We want to fight corruption and want stolen money to be returned by politicians.”

Hezbollah and Amal recently intensified pressure against protesters across Lebanon as the economic crisis worsened. The country has been without a government since October 29, when Prime Minister Saad Hariri resigned.

In another attack, in Beirut on Sunday night, Hezbollah supporters attacked people who were blocking a Beirut highway.

The violence was fuelled by Hezbollah’s outrage at the death of two people in a car accident after they hit a barrier set up to divert traffic near a protest south of the capital on Sunday morning.

The party described it as a “horrific crime” committed by “bandits”, but protesters said security footage clearly showed the car was speeding.

Hezbollah and Amal deny sending men out to attack protesters, but they have not condemned the violence.

Demonstrators say that the highly organised attacks could not have occurred without at least implicit support from both parties.

Hezbollah is widely respected for fighting Israel in the 1980s and 1990s, and a strong social network has strengthened its footing in Lebanese society.