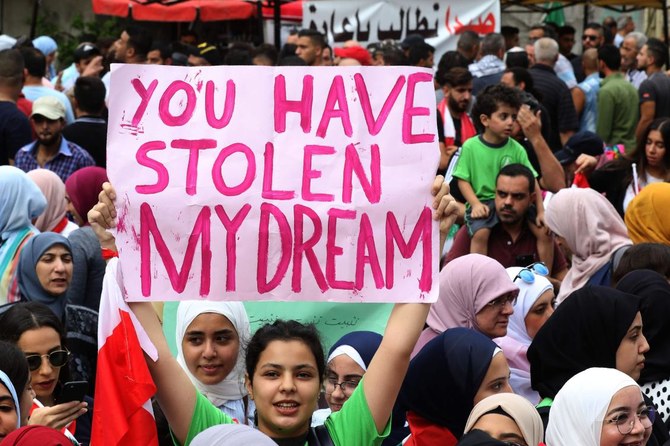 Students take part in an anti-government demonstration in the Lebanese southern port city of Sidon on October 23, 2019. (AFP)
Share:

Lebanese anti-government protesters lined up for free haircuts outside the central bank in Beirut Wednesday in a symbolic plea to make the rich pay and help rescue an economy in freefall.

“We’re here to teach them what a good haircut looks like,” said 34-year-old Rebecca Saade, waiting for a volunteer barber to snip away at her short brown hair.

She was among dozens of activists to have their locks trimmed in the latest of a wave of colorful protests to sweep the small Mediterranean country since October 17.

“The economic crisis is what pushed us into the revolution,” said masters student Racha, 24, drinking a coffee after she spent a chilly night in a tent outside the bank building, reported AFP.

Lebanese of all political and religious backgrounds have taken to the streets, angered by poor governance and corruption as well as by an economic downturn, bank closures and a dollar shortage that sparked mass capital flight.

Amid the turmoil, the government resigned on October 29, but the bitterly divided leadership has since failed to agree on the new cabinet desperately needed to implement economic reforms.

Protesters demand that measures to redress the economy do not unduly impact the poor but instead draw money from the richest, many of whom they accuse of corruption.

“It has to be done to the top financiers who have benefitted from corruption until now,” Saade said just before sitting under a black barber’s cape.

“The haircut should not be on us, especially since in the first few weeks they let all the biggest depositors take out all their capital,” she said.

Around her, dozens waved flags and chanted, seeking to grab the attention of the central bank chief, whose stenciled portrait with devil’s horns had been spray-painted onto a nearby wall.

The World Bank says about a third of Lebanese live in poverty, and that this could soon rise to half.

Lebanon also has a yawning wealth gap, according to the World Inequality Database.

The top one percent of the population control nearly 25 percent of national income, while the bottom half have little more than 10 percent.

The recent unrest has accelerated the downturn and sent the economy into “freefall”, according to Maha Yahya, director of think tank the Carnegie Middle East.

Debt-saddled Lebanon has had a liquidity crisis since September, with banks rationing the supply of dollars.

As a result, the exchange rate in the parallel market has shot up from the pegged rate of 1,507 pounds to the greenback to more than 2,000.

Some $800 million appeared to have left the country from October 15 to November 7, a period during which the banks were mostly closed.

Parliament Speaker Nabih Berri on Wednesday called for the money moved abroad to be returned, the National News Agency said.

Outgoing prime minister Saad Hariri said Tuesday he would not head the next government, in a move intended to speed up cabinet formation.

Protesters want a government made up only of technocrats not affiliated to traditional political parties, but analysts say that is a tall order.

They say a mixed cabinet of experts and political candidates — or independents picked by political parties — might be more likely.

A fresh name has been floated as a possible new premier — that of businessman and engineer Samir Khateeb — but Racha said she had never heard of him.

“Right now we really need someone whose specialty is the economy,” the protester said.

Analyst Yahya said that, to revive the economy, any new cabinet would have to “bridge the trust gap with the international community — but more importantly with the street”.