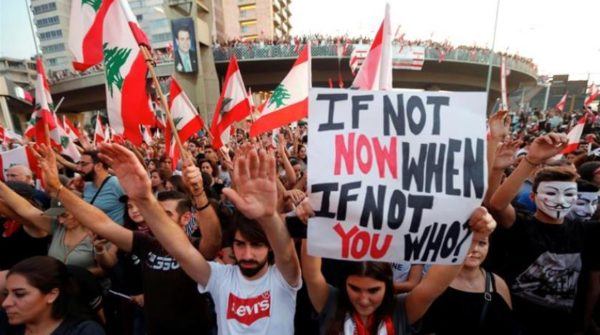 Lebanon’s caretaker information minister and two former telecoms ministers could face trial on charges of wasting public funds after their cases were referred to a special judicial panel set up to try top officials.

The decision by a prosecutor to refer the cases to the Supreme Council for the Trial of Presidents and Ministers, according to judicial sources and state news agency NNA, follows protests fuelled partly by corruption.

The charges are among the first to be brought against high-level officials since the start of the unrest, triggered by dire economic conditions and anger against a ruling class seen as pillaging the state’s resources and driving it into crisis.

In remarks to NNA, Jarrah called the proceedings “part of a political campaign” to defame him. He said the financial prosecutor had no legal right to refer the case to the council, a move he said requires a two-thirds vote from parliament.

Posting to Twitter, Sehnaoui said: “I am fully prepared to appear before the competent judiciary, confident in there being no impurity in my practice of public affairs in the service of my country.”

Harb declined to comment to Reuters until he had further information about the charges.

NNA did not provide further details about the exact nature of the corruption allegations.

The protests that have swept the country, and brought down Prime Minister Saad al-Hariri, were ignited on Oct. 17 by a government proposal to tax WhatsApp calls, a measure that was quickly scrapped.

The country has only two mobile service providers, both state owned, and some of the most costly mobile rates in the region, a common grievance among Lebanese.

Last February Financial Prosecutor, Judge Ali Ibrahim, criticized the legal system in Lebanon as “corrupt” and “protecting the corrupted,” stressing that the fight of corruption cannot be confined to a single institution but that it entails a process involving other entities, in addition to media and citizens themselves.

Ibrahim indicated that he had undertaken the necessary measures following the fresh statements of Hezbollah MP Hassan Fadlallah.

In addition, he said that Lebanon was now witnessing a “new climate” pertaining to the fight against corruption.