Beirut protesters vow to keep up the pressure 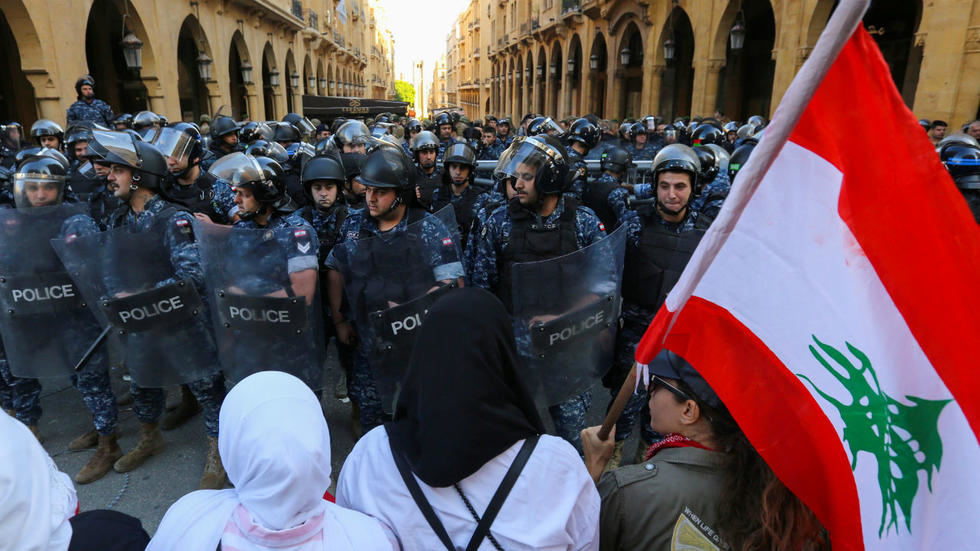 Lebanese protesters vowed on Wednesday to keep pushing for an overhaul of the country’s politics, a day after violence rocked Beirut as riot police clashed with demonstrators who prevented lawmakers from reaching parliament.

Tuesday began and ended with violence in downtown Beirut as anti-government protesters blocked off parliament to prevent MPs from holding a controversial meeting.

Riot police beat protesters with batons and threw several to the ground in repeated clashes throughout the morning.

Demonstrators blocked roads around the parliament building in the heart of the capital from 6am local time (4am GMT), facing off against heavy deployments of armed riot police and soldiers.

New barbed-wire barricades had been installed in anticipation of Tuesday’s protests, and security forces lined up five-men-deep with batons and shields at every entrance to Nejmeh Square, where parliament sits.

Just after 11am when the session was due to start, the secretary-general of parliament, Adnane Daher, issued a statement saying it would be postponed, citing “exceptional conditions, in particular security conditions”.

Protesters cheered the announcement, setting off fireworks over the square and singing and dancing as they banged pots, pans and metal barricades.

“It’s a big deal for us that we won,” said Claudia Channice, a young mother who had camped out near parliament on Monday night to be ready to block roads early the next morning.

“I was so happy and so overwhelmed. For the first time, I’m proud to be Lebanese.”

“They wanted to do this session badly but they couldn’t because we stopped them,” she added. “For the first time we feel that we’re really strong, we can make the change. It’s for our kids, because I don’t want my kids to hate Lebanon.”

Government at an impasse

Protesters have been taking to the streets for more than a month, calling for the downfall of a government they call corrupt and unrepresentative, and for a complete overhaul of the existing political class.

Just five of 128 MPs succeeded in reaching parliament for the meeting, according to local media inside the building. Another 53 MPs decided to boycott the session, citing protesters’ demands.

Protesters were angry that the session’s agenda did not include the nomination of a new prime minister, more than three weeks after caretaker premier Saad Hariri resigned.

The content of the draft bills to be discussed had also stoked anger. Protesters are concerned that a planned general amnesty law would be used by politicians to exculpate themselves from any financial crimes committed while in office.

A draft law creating an anti-corruption commission, while popular, would be ineffectual until a law guaranteeing judicial independence is passed, the protesters argue, noting that most judges are currently nominated by the existing political class.

And yet some argue Lebanon’s government is in no position to introduce reforms, with some legal experts saying the current government’s caretaker status makes it unconstitutional for parliament to be passing laws at all.

“In these circumstances – with a resigned government, with an economic crisis – there’s no room for parliament to legislate, especially after one month of protests,” says Diana Kallas, a governance adviser at the civil society organisation Kullna Irada. “It’s really comical – it’s surreal what we’re seeing today.”

Kallas says the amnesty law is so vague in its wording that “there’s a possibility of this covering crimes related to corruption, environment, torture, crimes in office, public embezzlement… we don’t know what it covers.”

“This is not how you legislate. Any law should be clear, transparent and precise, or it’s not constitutional,” she adds.

“We arrived to this financial crisis because of the lack of capacity of the current ruling parties to get together around issues that serve the national interest. There is dire need of a rescue government that is independent, that is competent and that can manage this crisis.”

The atmosphere in the streets surrounding parliament calmed considerably in the aftermath of the announcement that the parliamentary session had been cancelled, with riot police retreating to their usual positions at the entrances to Nejmeh Square.

By evening, only a few dozen protesters still milled around the area, lighting fires for warmth as they settled in to camp out for the night.

But following a football match, hundreds of protesters streamed back to the barricades that line the route to parliament.

“Everyone spontaneously headed back to protest after the match. They’re anxious and excited about what happened today,” said protester Laila Galaini. “It was a huge victory for us, we kicked Nabih Berri (the speaker) out of parliament! Our parents have dreamed of that for years.”

As other protesters gathered in Riad al-Solh Square, just metres from the parliament building, a few young men threw stones at the lines of riot police gathered behind fences of barbed wire.

Immediately pouring out of their base and into the crowd, officers chased down multiple young men indiscriminately, throwing them to the ground and beating them with batons. Two male protesters were knocked unconscious.

As protesters and local media attempted to film the clashes, riot police threatened those holding cameras and camera phones with their batons, demanding they stop filming. One officer grabbed the phone of a filming protester and smashed it to pieces on the ground.

A group of young protesters carried one of the unconscious men toward a Lebanese Red Cross ambulance, shouting for help, as another man was dragged behind the barbed-wire fence by riot police. Seven more young men were dragged behind the barrier, where officers continued to beat them with batons and kick them as they lay on the ground.

Security forces refused to confirm the identities of the young men, whether they had been arrested and on what charges. As police retreated, the crowd gathered again.

One protester began to berate the security forces, standing atop a concrete blockade between the two groups. “It’s our right to protest, and it’s your right to arrest us properly,” he shouted. “But not like this – not beating us, not detaining us with no information.”

“They’re disrespecting us like this because we won today, look how much we scared them,” said protester Mirna Makarem, sobbing with rage. “We’re trying so hard to keep this revolution peaceful and they’re pushing us, playing on our emotions. It cannot be like this, otherwise it will turn to be like all other revolutions – bloody.”

By midnight a total of 12 protesters had been detained in Riad al-Solh. They were released without charge after a night spent in police cells.

Seemingly undeterred by the violence of the day, demonstrators called on people to take to the streets again on Wednesday. Emboldened by their success, they say they now know what they are capable of.

“No time to rest, we’re going down again to carry on protesting,” said Channice. “I am more motivated [after today], I’m more willing to keep going – because it’s now or never for us.”