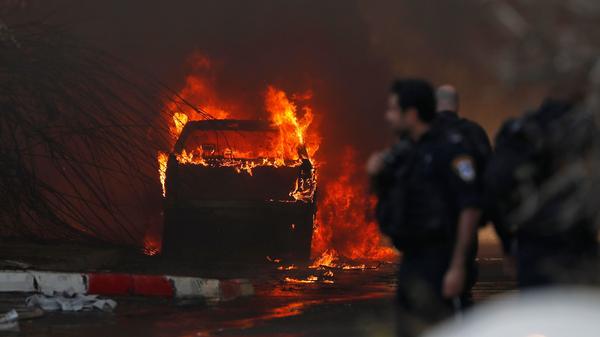 A vehicle burns outside a factory that was apparently hit with rocket fire Tuesday in the southern Israeli town of Sderot. Israel’s military announced it had killed a commander of the Palestinian militant group Islamic Jihad in an early morning strike on his home in the Gaza Strip, prompting retaliatory barrages from Gaza.
Share:

Rocket fire rained from the sky across the border between Israel and the Gaza Strip, leaving at least seven people dead in Gaza and dozens more injured on either side Tuesday. Among the dead was Bahaa Abu el-Atta, commander of a militant group in Gaza known as Palestinian Islamic Jihad, according to the Israel Defense Forces.

The IDF announced early Tuesday that it had successfully targeted Abu el-Atta in an airstrike — a move that set off a furious barrage from Gaza. The Israeli military says militants retaliated by launching scores of rockets into Israel, where residents in the country’s center and south scrambled into shelters and schools closed amid the wail of air raid sirens.

“He was a ticking bomb,” Israeli Prime Minister Benjamin Netanyahu said of Abu el-Atta during a news conference Tuesday, asserting that the militant leader was “in the midst of planning additional attacks in the immediate short term.”

The prime minister noted that he and Israeli military and intelligence leaders approved the operation 10 days ago and that they waited for a “unique window of opportunity to carry out the action, under optimal conditions with maximum chance of success and minimal chance for hitting anyone uninvolved.”

Still, the Palestinian news agency WAFA reports that the attack killed not only Abu el-Atta and his wife but also at least three other Palestinians. At least 45 other people in Gaza reportedly were injured, according to Gaza health officials, and at least 19 people in Israel were injured in the retaliation.

Syria’s state-run media agency says that around the same time as the Israeli raid on Gaza, Israeli warplanes fired missiles at a residential building in Damascus, where SANA reports two civilians were killed and 10 others injured. The attack targeting another Islamic Jihad commander, Akram al-Ajouri, reportedly failed to harm him but killed his son and granddaughter.

Israel did not comment Tuesday on the reported attack in Syria.

“Israel executed two coordinated attacks, in Syria and in Gaza, in a declaration of war,” Khaled al-Batsh of Islamic Jihad said at a funeral for Abu el-Atta in Gaza, according to Reuters. The wire service noted that other mourners replied by firing their weapons in the air and chanting, “Revenge!”

Hamas, the Islamist group that controls Gaza, condemned Abu el-Atta’s killing in a series of statementsTuesday, saying the move represented a “dangerous escalation and a continuation of the Israeli aggression and terrorism against the Palestinian people and resistance.”

“Targeting an icon of the Palestinian resistance reveals preliminary intentions of the Israeli occupation to go into a new battle against the Palestinian resistance in order to export its internal crises and impose new rules of engagement,” said Fawzi Barhoum, a spokesperson for the organization, which the U.S. and Israel consider a terrorist group.

The spasm of cross-border violence, the deadliest to rack the region in months, comes at a turbulent time in Israel’s domestic politics.

Two muddled elections this year have failed to break a stalemate between Netanyahu’s conservatives and the centrist Blue and White party of his rival Benny Gantz. Just last month, Netanyahu acknowledged his failure to form a new governing coalition, leaving the mandate to Gantz. But with both their parties nearly evenly matched among lawmakers, it’s unclear whether Gantz will have any greater success.

If he, too, fails to form a government, Israel faces the prospect of holding yet a third election in the span of less than a year.