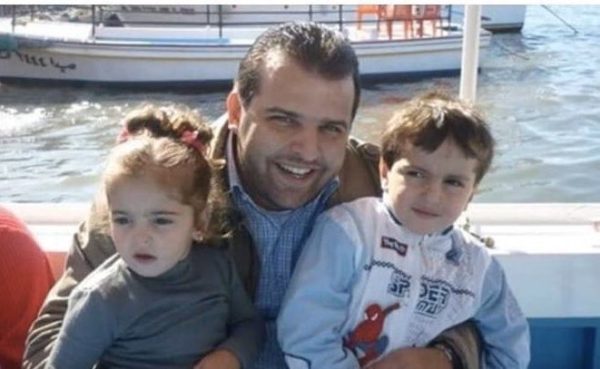 Alaa Abu Fakhr is shown with his children . Was shot dead south of Beirut in the presence of his wife and child by a soldier named Charbel Hujail after the army opened fire to disperse protesters blocking roads
Share:

The victim “succumbed to his injuries” in hospital, the National News Agency said, the second death during the nationwide protests that have paralysed the country.

The army said in a statement that it had arrested a soldier after he opened fire in the coastal town of Khalde, just below the capital, to clear protesters “injuring one person”.

Protesters have been demanding the ouster of a generation of politicians seen by demonstrators as inefficient and corrupt, in a movement that has been largely peaceful.

On Tuesday night, street protests erupted after President Michel Aoun defended the role of his allies, the Shiite movement Hezbollah, in Lebanon‘s government.

Protesters responded by cutting off several major roads in and around Beirut, the northern city of Tripoli and the eastern region of Bekaa.

The Progressive Socialist Party, led by influential Druze politician Walid Jumblatt, said in a statement that the man shot dead was one its members.

A long-time opponent of President Michel Aoun, Jumblatt appealed to his supporters to stay calm.

“In spite of what happened, we have no other refuge than the state. If we lose hope in the state, we enter chaos,” he said.

The government stepped down on October 29 but stayed on in a caretaker capacity and no overt efforts have so far been made to form a new one, as an economic crisis brings the country to the brink of default.

On Tuesday morning, dozens of protesters had gathered near the law courts in central Beirut and tried to stop judges and lawyers from going to work, demanding an independent judiciary.

Many schools and universities were closed, as were banks after their employees called for a general strike over alleged mistreatment by customers last week.

The UN’s special coordinator for the country, Jan Kubis, urged Lebanon to accelerate the formation of a new government that would be able “to appeal for support from Lebanon’s international partners”.

“The financial and economic situation is critical, and the government and other authorities cannot wait any longer to start addressing it,” he said.

The leaderless protest movement first erupted after a proposed tax on calls via free phone apps, but it has since morphed into an unprecedented cross-sectarian outcry against everything from perceived state corruption to rampant electricity cuts.

Demonstrators say they are fed up with the same families dominating government institutions since the end of the 1975-1990 civil war.

In his televised address on Tuesday, Aoun proposed a government that includes both technocrats and politicians.

“A technocratic government can’t set the policies of the country” and would not “represent the people”, he said in the interview on Lebanese television.

Asked if he was facing pressure from outside Lebanon not to include the Iran-backed Hezbollah in a new government, he did not deny it.

But, he said, “they can’t force me to get rid of a party that represents at least a third of Lebanese”, referring to the weight of the Shiite community.

The latest crisis in Lebanon comes at a time of high tensions between Iran and the United States, which has sanctioned Hezbollah members in Lebanon.

Forming a government typically takes months in Lebanon, with protracted debate on how best to maintain a fragile balance between religious communities.

The World Bank says around a third of Lebanese live in poverty and has warned the country’s struggling economy could further deteriorate if a new cabinet is not formed rapidly.