‘At least 35’ GOP senators would vote for Trump impeachment if vote was private: Sen.Flake 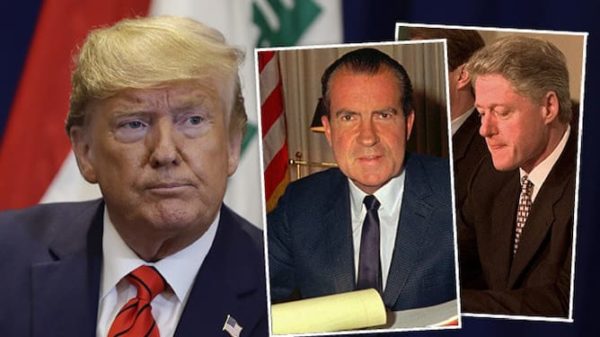 Several political groups assert that U.S. president Donald Trump L has engaged in impeachable activity both before and during his presidency, like his predecessors Nixon C and Clinton R
Share:

Former Republican Senator Jeff Flake said that he thinks at least 35 Republican senators would vote for President Donald Trump to be removed from office if they could vote in private.

Speaking at the 2019 Texas Tribune Festival Thursday, Flake was responding to comments made by Republican political consultant Mike Murphy on MSNBC who said that if there was a secret vote, at least 30 GOP Senators would back impeachment.

Once an officeholder has been impeached, the proceedings shift to the Senate, which holds a trial and decides whether to convict the accused and remove him or her from office.

Calls for an official impeachment inquiry came to fruition Tuesday by House Speaker Nancy Pelosi over the president’s efforts to get Ukraine to investigate Joe Biden and his son, Hunter.

During an interview with NPR, the Arizona Republican elaborated on his comments, continuing that “anybody who has sat through two years, as I have, of Republican luncheons realizes that there’s not a lot of love for the president. There’s a lot of fear of what it means to go against the president, but most Republican senators would not like to be dealing with this for another year or another five years.”

A two-thirds majority, or 67 senators, is needed to convict and remove the accused from office. Republicans currently hold the majority. For the President to be removed from office by the Senate with impeachment, at least 20 Republicans would need to join the Democrats and independents

Flake was one of the President’s most visible GOP critics in the Senate and announced he wouldn’t be seeking re-election in 2017, citing nastiness of Trump-era politics.

“That was a pretty damning transcript,” Flake said of the summary of the July 25th phone call between Trump and Ukraine President Volodymyr Zelensky released Wednesday. “That was not anything you want your president to be doing. I think we need to wait for the investigation to conclude and wait for likely testimony from the whistleblower him or herself before drawing conclusions. But it seems the House is already moving ahead.”

He stated that he was glad “to see the (House) Intel Committee have the hearing yesterday,” elaborating that he doesn’t want to see impeachment in such a divided country, and that he’d rather see the President defeated the “old fashioned way at the ballot box.”

Flake reinforced Trump’s power of the Senate GOP, stating that “this is the president’s party without a doubt. And to win a Republican primary in just about every state, you’ve got to be with the president. And there’s a lot of fear that if you aren’t, you’ll get primaried.”

Flake also said that he has “not ruled out” voting for a Democrat over Trump, hoping that the “Democrats nominate somebody who has a broad appeal.”