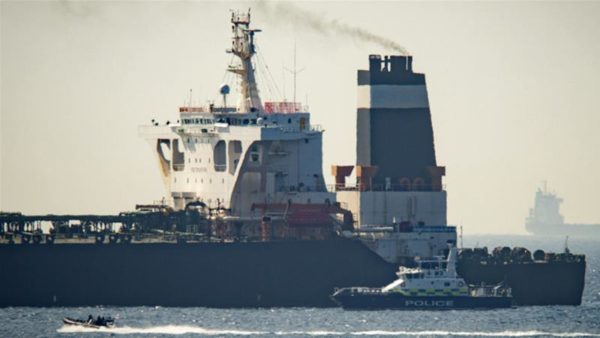 British Royal Marines seized the supertanker Grace 1 for trying to take oil to Syria . The tanker is now in the Mediterranean near the Tartus port in Syria which is home to Russian naval base[Marcos Moreno/AP]
Share:
The United States has issued a warrant to seize an Iranian oil tanker caught in the standoff between Tehran and the West in a last ditch effort to prevent the vessel from leaving Gibraltar.

The Grace 1 was seized by British Royal Marines at the western mouth of the Mediterranean on July 4 on suspicion of violating European Union sanctions by taking oil to Syria.

Gibraltar lifted the detention order on Thursday after the British territory’s chief minister said he had secured written assurances from Tehran that the cargo would not go to Syria.

But with the vessel and its 2.1 million barrels of oil free to leave, the United States launched a separate legal appeal to impound the ship on the grounds that it had links to Iran’s Islamic Revolutionary Guard Corps (IRGC), which it designates as a terrorist organization.

A federal court in Washington issued a warrant to seize the tanker, the oil it carries and nearly $1 million.

“A network of front companies allegedly laundered millions of dollars in support of such shipments,” the U.S. attorney for the District of Columbia, Jessie Liu, said in a news release.

“The scheme involves multiple parties affiliated with the IRGC and furthered by the deceptive voyages of the Grace 1.”

The U.S. State Department did not immediately respond to a request for comment on how the warrant, which was addressed to “the United States Marshal’s Service and/or any other duly authorized law enforcement officer,” may be enforced.

The Pentagon declined to comment, as did Britain’s Foreign Office.

Asked on Friday about the U.S. intervention, Gibraltar’s chief minister, Fabian Picardo, said that would be subject to the jurisdiction of Gibraltar’s Supreme Court. “It could go back to the court absolutely.”

The Gibraltar Chronicle newspaper reported that the vessel was unlikely to sail before Sunday, citing an unnamed source who added that it was waiting for six new crew members including a captain to arrive.

The Grace 1 had its name erased and it was no longer flying a Panama flag.

Iranian state television had quoted Jalil Eslami, deputy head of the country’s Ports and Maritime Organisation, as saying the tanker would depart for the Mediterranean after being reflagged under the Iranian flag and renamed Adrian Darya.