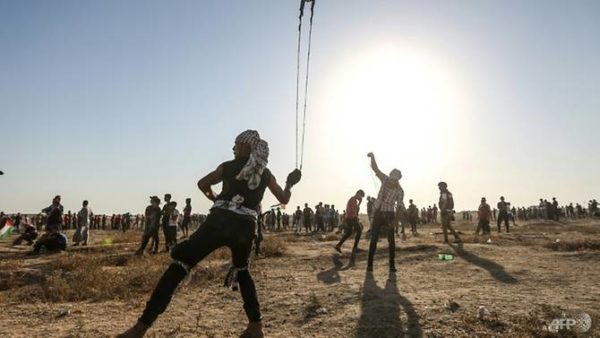 Regular protests along the Gaza border that began in March last year have declined in intensity in recent months after UN and Egyptian officials brokered an informal truce between Israel and Gaza’s Islamist rulers Hamas AFP/MAHMUD HAMS Read more at https://www.channelnewsasia.com/news/world/israeli-warplanes-hit-gaza-after-palestinian-rocket-attack-11817476
Share:

The strikes, which came after Palestinians fired a rocket from the territory at southern Israel late Friday, hit a Hamas observation post in Beit Hanoun, in the northern Gaza Strip, an unidentified target near Gaza City and open ground near Deir El Balah in the central part of the territory, the source said.

An Israeli army statement mentioned only two strikes, against “underground targets belonging to the Hamas terror organisation in the northern and central Gaza Strip”. It did not elaborate.

The army said that Friday night’s rocket launch at southern Israel was the first since July 12.

A military statement said the rocket was intercepted by Israel’s Iron Dome defence system, after air raid sirens sounded in the southern town of Sderot and its surroundings.

Earlier Friday, the Palestinian health ministry said that 32 Palestinians were wounded by Israeli live fire during weekly protests along the Gaza border.

An Israeli army spokeswoman told AFP that about 5,600 people demonstrated along the border, some throwing hand grenades and explosive devices toward soldiers and attempting to reach the border fence.

She said that troops responded with “riot dispersal means” but she was unaware of any live fire.

Regular protests along the border began in March 2018.

At least 302 Palestinians have been killed by Israeli fire in Gaza or the border area since then, the majority during demonstrations or associated clashes.

Seven Israelis have been killed in Gaza-related violence over the same period.

The protests have declined in intensity in recent months after UN and Egyptian officials brokered an informal truce between Israel and Gaza’s Islamist rulers Hamas.

Israel and Palestinian militants in Gaza, have fought three wars since 2008.