Kushner’s real purpose has little to do with a peace plan. Failure is the goal 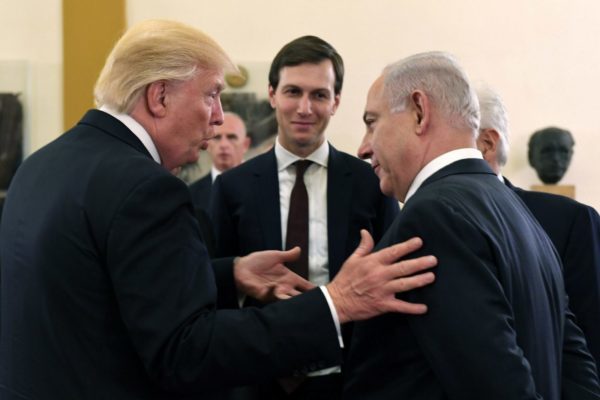 The Middle East envoy, on a tour of the region, champions a shift away from a two-state solution to wholesale support of Israeli annexation

The charade continues and the circus is in town. Jared Kushner, Donald Trump’s son-in-law and Middle East emissary, is visiting Israel, Jordan, Egypt, Saudi Arabia and Morocco to try to drum up support for his as-yet-unreleased “peace plan”.

He is likely to be disappointed again by the reaction in the region, but his real aims have little to do with the Middle East and everything to do with American domestic politics.

In this case, failure isn’t only an option, it’s virtually a goal.

Mr Kushner has been touting his plan for more than a year but there is still no sign of it. That is because of the extreme damage it will do to the US reputation in the Arab world and to any remaining prospects of a peace agreement.

But even though the plan has not been formally released, even to governments close to the US, thanks to a series of leaks, statements and pointed hints, we now have a pretty good idea of what is being cooked up by Mr Kushner and his two partners, Middle East peace envoy Jason Greenblatt and US ambassador to Israel David Friedman.

It is clearly going to centre on a complete repudiation of the two-state solution that has driven US policy since at least the end of the Cold War in the late 1980s and effectively since the 1967 war.

The two-state solution is also deeply rooted in international law, with its origins in UN Security Council resolutions 242 and 338, which followed the 1967 and 1973 wars respectively; the 1993 Declaration of Principles signed between Israel and the Palestine Liberation Organisation; and UN Security Council resolution 1397, which in 2002 called for the creation of a Palestinian state alongside Israel.

Mr Kushner and his colleagues have been remarkably agile in avoiding anything that might smack of this long-standing international goal. He says he won’t use the term “two states” because “if you say two-state, it means one thing to the Israelis [and] one thing to the Palestinians”. Obviously, that’s equally true of peace – or any word, for that matter.

Mr Friedman then mused philosophically: “What is a state?” as if the basic attributes of statehood and sovereignty under the UN system were a profound metaphysical mystery.

On Palestinian liberties, Mr Greenblatt also seemed bewildered by conceptual complexities, saying that, when it comes to Palestinians, “rights is a big word”.

Such sophistry aside, Mr Friedman last week acknowledged that the Trump plan will not call for Palestinian statehood but “Palestinian autonomy”, whatever that means, presumably within a vastly unequal Greater Israel.

These three men are passionate supporters of Israel but they are not simpletons. They know this is a complete non-starter for the Palestinians and other Arabs.

The Arab world remains united behind the 2002 Arab Peace Initiative, which calls for peace with Israel based on the creation of a Palestinian state, with its capital in East Jerusalem. No Arab government has given any indication of abandoning that policy.

Given that their efforts have nothing whatsoever to do with advancing peace, what is the Trump team really trying to achieve?

It has been obvious for more than two years, although it has taking many people a long time to see it.

They are trying to shift US policy away from the baseline expectation and long-standing bipartisan consensus of a two-state outcome and create a US political climate that supports the Israeli annexation of occupied territories such as Jerusalem and the Golan Heights and repudiates Palestinian independence.

Internationally, this is designed to advance the extreme Zionism championed by Mr Kushner and his colleagues, help Benjamin Netanyahu remain Israeli prime minister, facilitate the recognition of a Greater Israel and eliminate prospects for a Palestinian state.

Domestically, which is all Mr Trump cares about, the policy is aimed at appealing to his strongest body of support, those evangelical Christians who yearn for the apocalypse and second coming and who are single-minded in support of Israel’s occupation and expansion.

Republicans are also hoping that by abandoning the two-state solution – whose greatest champion, ironically, was probably George W Bush in his second term – they can create what they are calling a “Jexodus” of Jewish Americans away from the Democrats towards their own party.

Already, many Republican factions appear to be joining the Trump administration in renouncing the two-state solution and embracing Israeli annexation.

Whether this could lead to serious Republican inroads with Jewish Americans remains to be seen. It is possible that Democrats might follow suit to keep hold of Jewish support, expanding the US constituencies abandoning the idea of peace.

Mr Kushner’s current trip, just like his investment conference in Bahrain, will almost certainly prove a total bust – and the release of any such plan would be a devastating blow to ending the conflict.

But none of that is a failure for Mr Kushner and Mr Trump. To the contrary, while it’s a catastrophe for peace, this elaborate fiasco is serving their cynical ideological and political purposes admirably. For them, this is a great success.