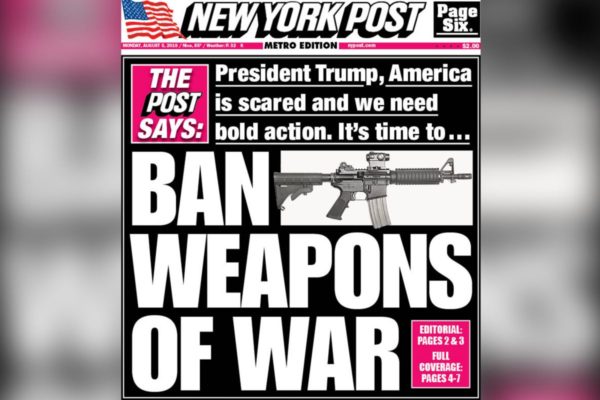 After the Parkland shooting in February of 2018, the New York Post implored President Trump to take action and “help stop the slaughter”:

A year and a half later, not much has changed, apparently:

That’s the cover of Monday’s edition, in which the editorial board, listing several recent mass shootings, pleads for action from the president.

‘People all across the nation are scared; many feel like the country is spinning out of control. They’re looking to their leaders for more than prayers. America is terrified. President Trump, you are positioned to assuage that fear. On gun control, you are a pragmatic centrist, someone who knows there is a vast majority of Americans who are not to the extreme left or right on this issue. They just want the killings to stop.’

The Post touched on how Trump regularly praises the Second Amendment and also received support from the NRA in the 2016 race.

“But the Second Amendment leaves ample room for regulating gun rights, just as every other constitutional right has its limits,” the board wrote in the editorial. “And Trump has sneered at others for being afraid of the NRA when it comes to passing common-sense gun laws. “

The Post, which is owned by News Corp NWSA , listed several steps it believes should be taken now: Return the assault-weapons ban, continue to improve background checks, find better approaches to mental heal and get every state to pass a red-flag law.

“And by all means,” the board wrote in Monday’s edition, “do as Sen. Elizabeth Warren suggested in last week’s Democratic debate and ‘double down on the research and find out what really works.’”

“Our Founding Fathers gave us the right to bear arms in a time of muskets. They did not foresee a time when one 21-year-old could kill 20 people in the span of minutes thanks to poisonous beliefs and an assault weapon,” the Post said in the editorial. “It does not have to be this way. It should not have to be this way. Mr. President, do something — help America live without fear.”