Dow plunges over 800 points as trade war with China intensifies 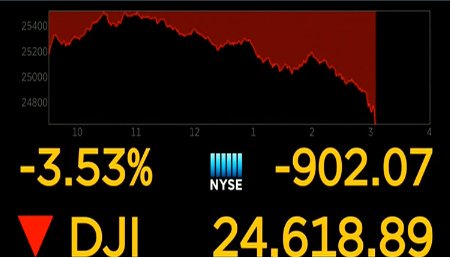 The Dow Jones Industrial Average plunged 840 points and dropped as much as 951 points. The S&P 500 dropped 2.9%. The Nasdaq Composite lagged, falling 3.4%. The S&P 500 was headed for its worst day of 2019. The indexes have also fallen more than 5% from their record highs set last month.

The move continues a sell-off that began last week when President Donald Trump ordered new tariffs on the rest of Chinese goods and the Federal Reserve failed to signal it would be as aggressive as the market hoped in backstopping the economic slowdown. The Nasdaq was on track to fall for a sixth straight session, which would be its longest losing streak since late 2016. The S&P 500 also headed for a six-day losing streak. The Dow was set to fall for a fifth straight day.

Apple led the decline in stocks that have the most to lose from these new tariffs, losing 5.4%. Nike dropped 3.1%. Macy’s and Best Buy pulled back 5% and 4.8%, respectively. The SPDR S&P Retail ETF (XRT) traded 3.2% lower. FedEx dropped 5.2%. Caterpillar and Boeing dropped 3.6% and 3%, respectively. Semiconductor stocks like Micron Technology, Skyworks Solutions and Advanced Micro Devices fell at least 4.7%.

“Now we have a trade situation that is going off the rails as the side effects multiply due to the ramping up of the use of tariffs and we are only further apart from any resolution with the Chinese,” said Peter Boockvar, chief investment officer at Bleakley Advisory Group. “The policy of using tariffs as a tool to address our legitimate beefs with the Chinese has failed miserably.”

China, which has historically controlled its currency, the yuan, allowed it to fall to its lowest level on Monday against the dollar in more than a decade. The onshore yuan broke above 7 per U.S. dollar and traded at 7.05.

Trump later accused China of manipulating its currency, saying in a tweet: “This is a major violation which will greatly weaken China over time.”

China “appears to have decided that, given the increasingly dim prospects of a trade deal with the US, the boost to China’s export sector from currency depreciation is worth attracting the ire of the Trump,” Julian Evans-Pritchard, senior China economist at Capital Economics, wrote in a note. “The fact that they have now stopped defending 7.00 against the dollar suggests that they have all but abandoned hopes for a trade deal with the US.”

Along with the currency move, China retaliated by suspending the purchases of U.S. agricultural products and threatened to slap tariffs on the farm goods purchased after Aug. 3, according to state media and other reports.

These moves come after Trump announced last week the U.S. would impose a 10% tariff on $300 billion worth of Chinese imports. The tariff will take effect on Sept. 1. Trump’s announcement came after Chinese and U.S. officials discussed trade earlier last week as the two countries tried to restart talks.

That tariff would target retail, along with other consumer goods from companies like Apple. The tech giant told U.S. Trade Representative Robert Lighthizer in a June letter that tariffs on this tranche of goods would hit “all of Apple’s major products,” hindering the company’s contributing to the economy.

Investors rushed to traditional safe havens like Treasurys and gold on Monday amid the uncertainty. The benchmark 10-year Treasury yield fell to 1.74% and reached its lowest level since November 2016. Gold futures for December delivery gained 1.3% to settle at $1,476.50 per ounce.

The Cboe Volatility Index (VIX), widely considered to be the best fear gauge in the market, jumped 31.8% to 23.21.