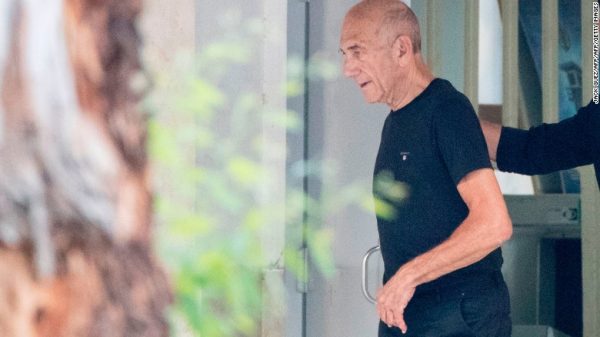 File photo of former Israeli prime minister Ehud Olmert shows him getting out of jail in July 2017
Share:

As first reported by Israel’s Channel 12, Olmert was due to visit the country on a business trip, ahead of which, Israeli authorities liaised with their Swiss counterparts to coordinate security arrangements.

However, during discussions Switzerland informed the Israeli Ministry of Justice that if Olmert landed in Zurich, he would be summoned for questioning and faced the potential of arrest for war crimes committed during the “Operation Cast Lead” assault on the Gaza Strip in 2008-2009.

Thus, “following a series of consultations with the Israeli Foreign and Justice Ministries, Olmert was reportedly forbidden from flying abroad”, i24News reported.

Olmert was prime minister in the period 2006-2009, after which he subsequently spent 16 months in prison for accepting bribes and obstruction of justice during his tenure as mayor of Jerusalem and trade minister.

During “Operation Cast Lead”, a three-week long offensive by the Israeli military on the occupied and blockaded Gaza Strip, more than 1,300 Palestinians were killed by Israeli forces, including more than 300 children.